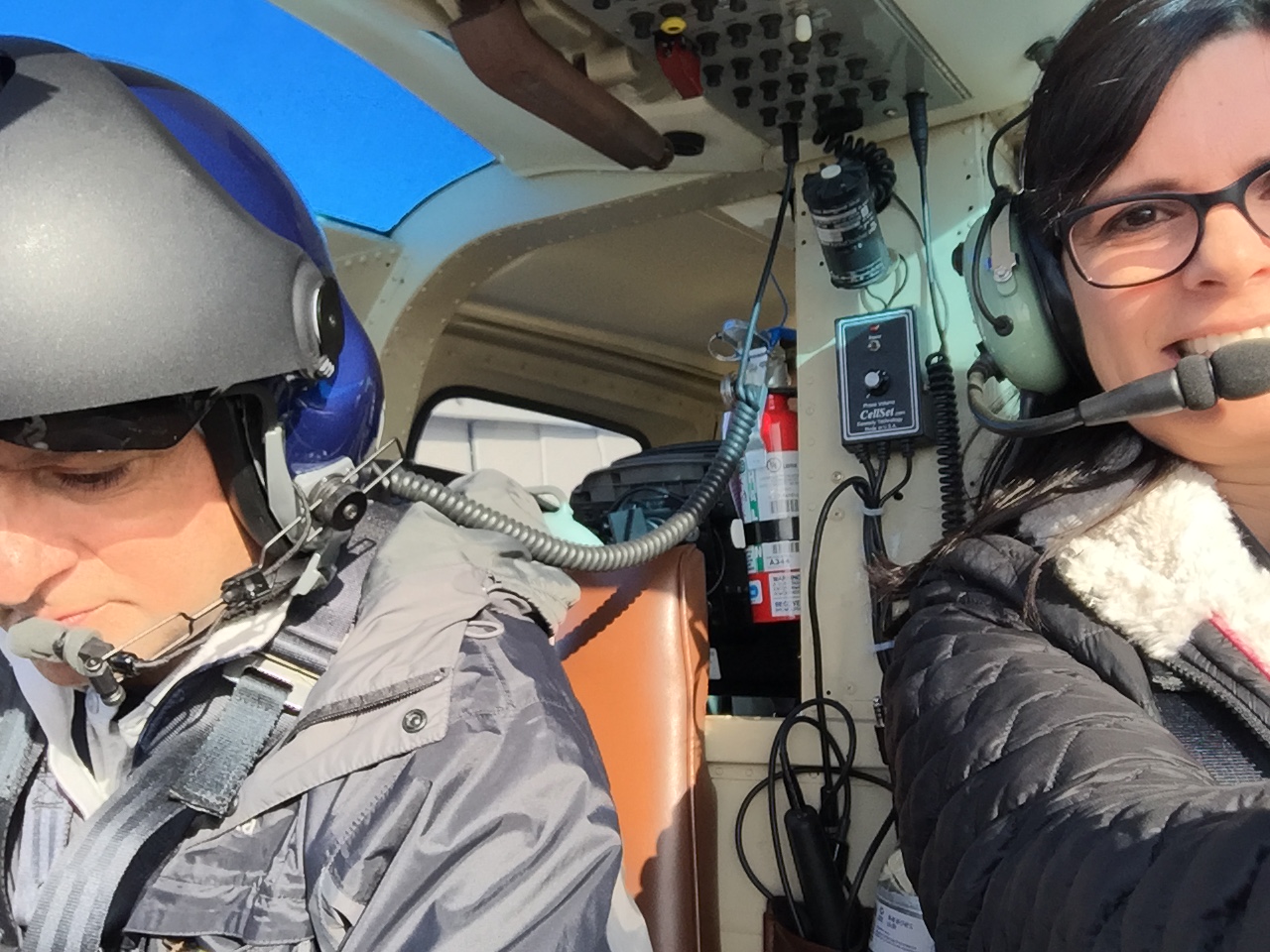 A couple of weeks before my 52 Magic Mondays project completed, I had the opportunity to do photography from a helicopter! I don't know if I would have said yes a couple of years ago. But my NYC journey resulted in my releasing an amazing amount of fear. Unbeknownst to me, my fear of heights was drastically reduced, as was my fear of flying in small crafts. And frankly, even my fear of death (which has plagued me all of my life) was abated.

One of my favorite parts of this helicopter adventure was the 4 "coincidences" that happened in the 48 hours before the flight.

#1) As usual, on Sunday nights before the next Magic Monday I would do research to plan my Magic Monday trip into the city. The next day was Week 49 and I was running out of creative ideas...kind of been there done that in NYC for 2016. On this evening, I said to my husband, "gee, maybe I should take a helicopter ride around Manhattan for Magic Mondays." Of course I had spent well over $1,000 on train tickets for the year so a helicopter ride was out of the budget at this point in the project. But it was fun to imagine doing that for a moment.

#2) There was an early morning text from my husband who was already at work. 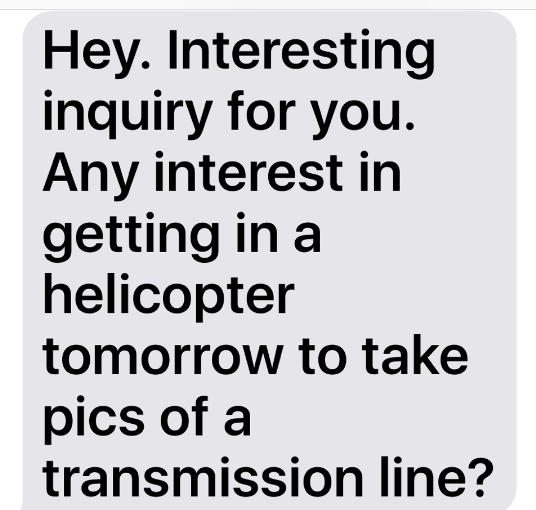 Can't make this stuff up. I said "YES" before I let my small self talk me out of such an adventure. Was I nervous and a tad scared? Of course. But certainly not enough to stop me from grabbing this opportunity. My husband cautioned me that this was not a 100% sure thing. There were many variables including wind, weather, availablity of the helicopter, etc. I totally understood. I was flexible but hopeful.

#3) Jumped in the shower and was very excited about both my Magic Monday day and the possibility of a helicopter ride the next day - and for the helicopter ride to be a photography endeavor made it that much more special. Got out of the shower and heard a message come through on my phone. Thought it was my husband with an update on the flight. Nope. It was a message from a photography friend, Pam, who really didn't send me messages very often at all.

In a matter of 15 minutes, two people mentioned helicopters to me. Combine that with my thought the previous night about taking a helicopter ride over Manhattan for Magic Mondays and you've got one big "coincidence". I felt quite confident the Universe was telling me this flight was going to happen tomorrow. I was excited but remained open to how the next two days would unfold.

#4) Off I went to the Fairfield train station for Week 49. Got on the train which wasn't overly crowded and found a seat by myself. I didn't see them, but I could hear a family several rows ahead of me, kids giggling and talking. A few minutes after leaving Fairfield, the train is chugging along, and then I hear one of the kids (he sounded maybe 9 years old) - he startes repeating the words "I believe I can fly, I believe I can fly."

I sat for a moment and thought, gee, isn't that the name of an older song that a kid that age would likely never have heard? And, of course, the thought of the possibility of me flying in a helicopter the next day also made me take special notice of the boy's words. I made a mental note to listen to that song.

I was shocked when I listend to the song. The lyrics spoke to me. The song described so much of my Magic Monday journey as I got to know myself, let go of fears, judgements and the realization that I am the writer, producer and director of my own life in a much bigger (and different) way than I ever realized. If I believed I could do something, then it was possible. I will put a link to the song on YouTube at the bottom of the page.

Indeed the helicopter ride happened the next day. By 11am on December 13th, I was lifting off. We traveled between Bridgeport and New Haven back and forth twice. The flight last about 2 hours. 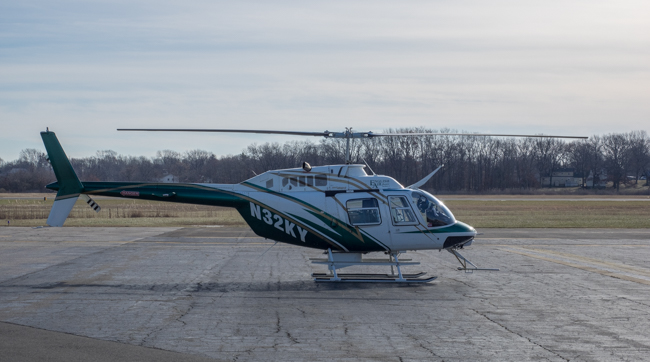 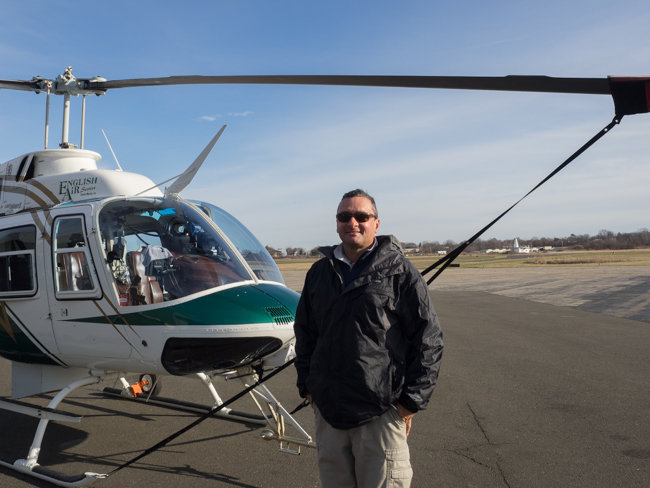 My cool pilot. We are still in touch! There is something about having an experience that is both exhilarating and (a tad) terrifying that bonds you with another person. Especially the person responsible for your takeoff and landing. LOL 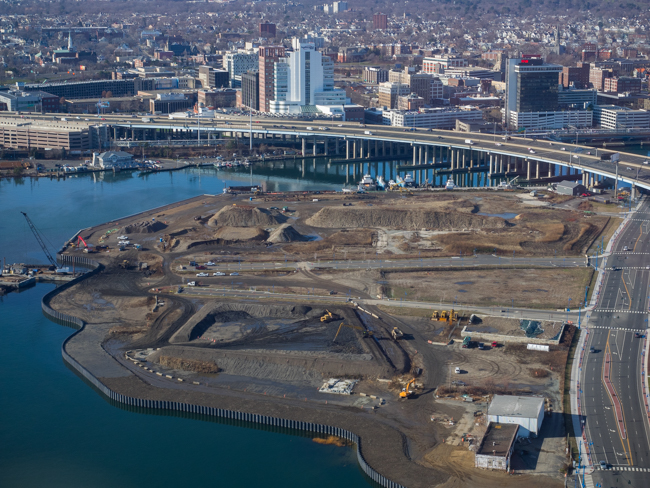 They are building a new ferry building in Bridgeport. This was December, 2016. I'm writing this in March of 2018 so I'm assuming it's much farther along now. You never know, proejcts run out of money. ;) 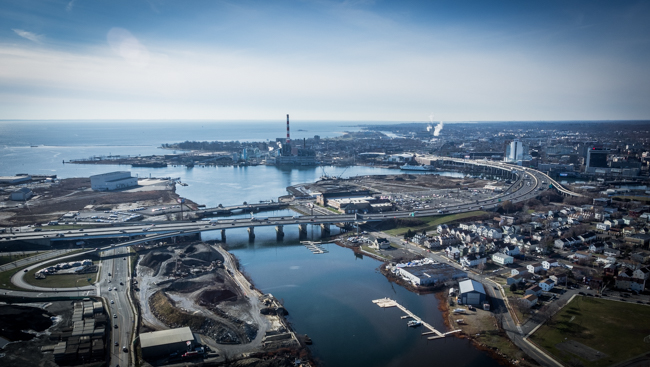 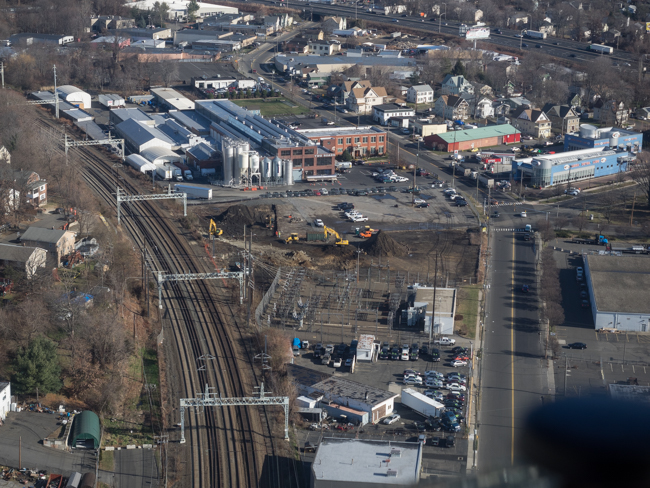 Two Roads Brewing, Stratford. Across the street there is a former Texaco station that is now (as of 2018) an adorable (and photogenic!) pizza place. In this photo, when I zoomed in I could see that they were working on building out PizzaCo.
You can view my 2018 photos of PizzaCo here. 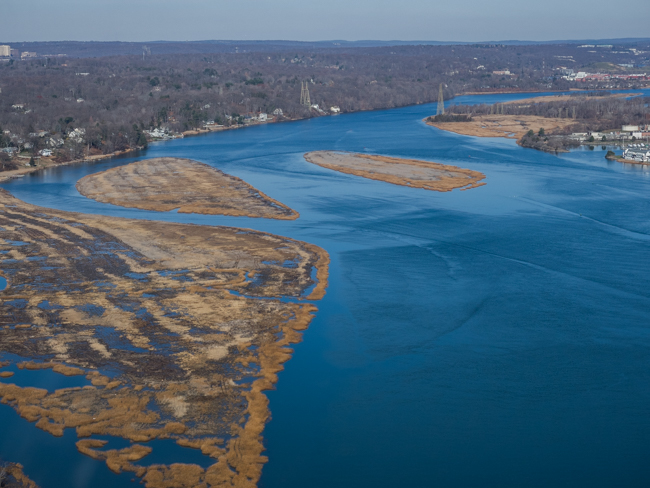 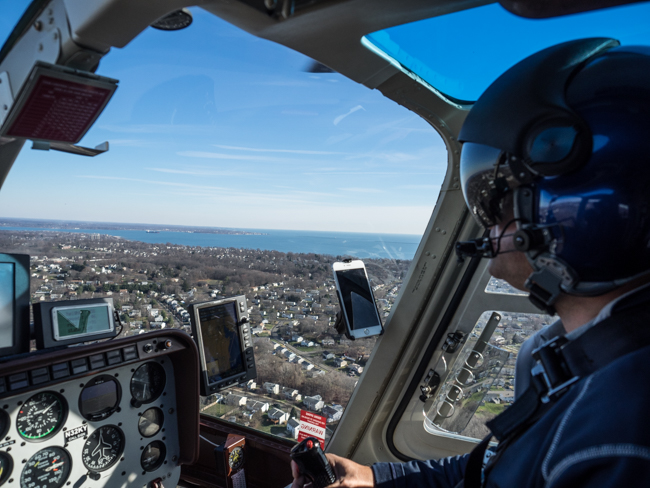 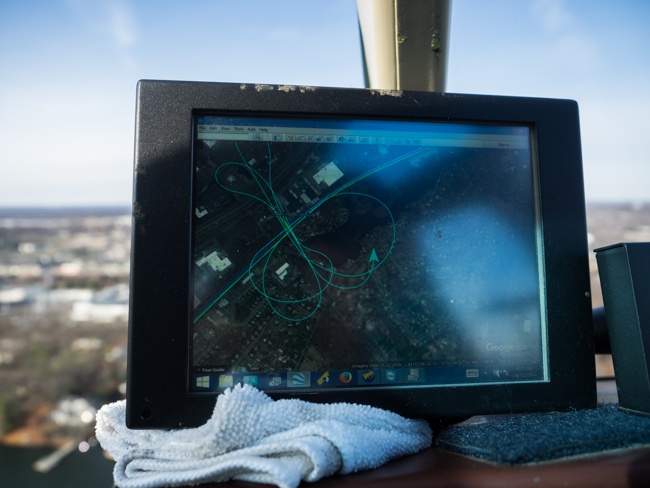 These were the loops we were doing. The bottom of the helicopter had all sorts of camera equipment which was recording everything we were covering. 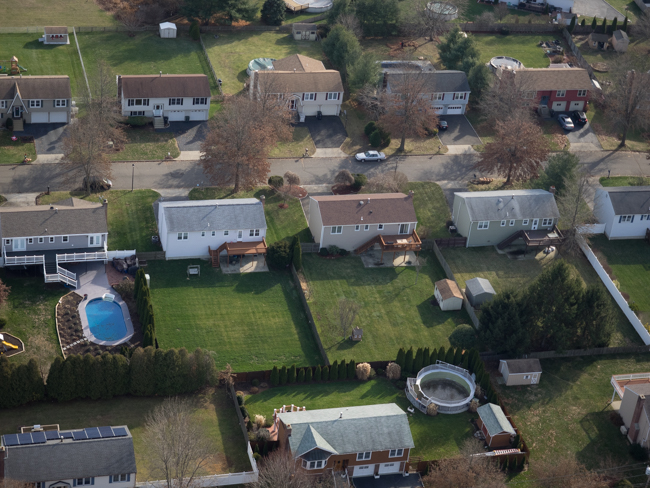 Cookie cutter looking homes from this view. And lack of pool covers. It was pretty darn green for December though. 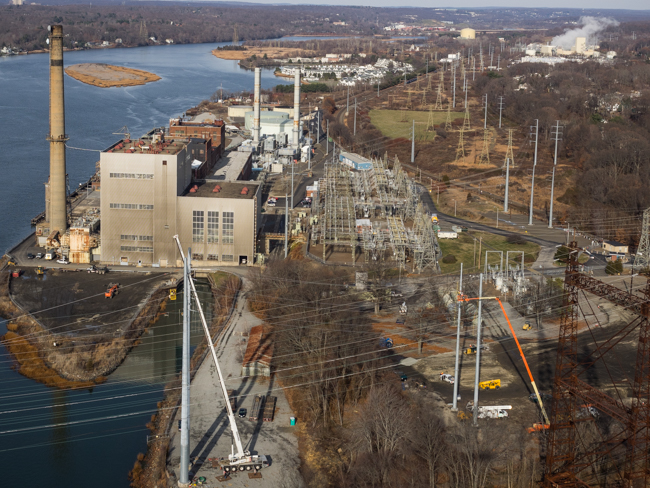 The magic of power distribution. We just expect things to work when we plug our gadgets into the walls, but a lot goes on to make that happen. 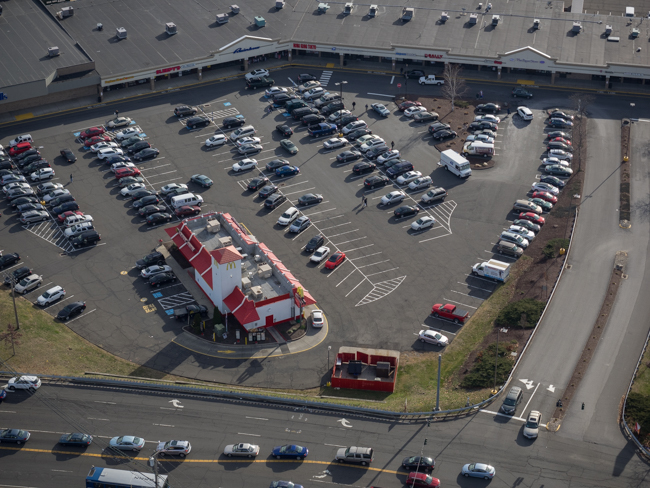 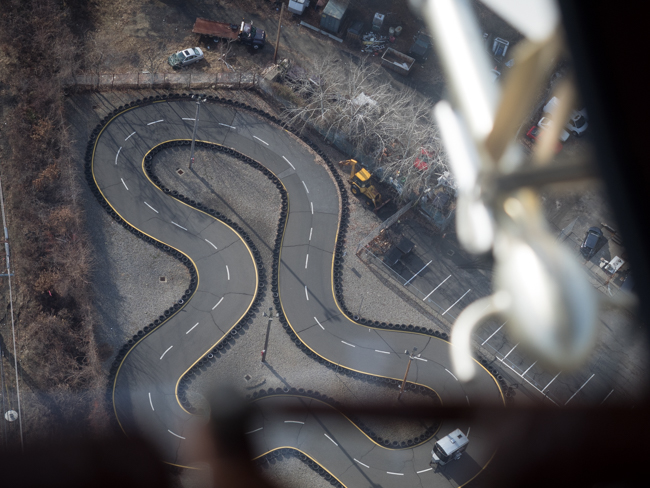 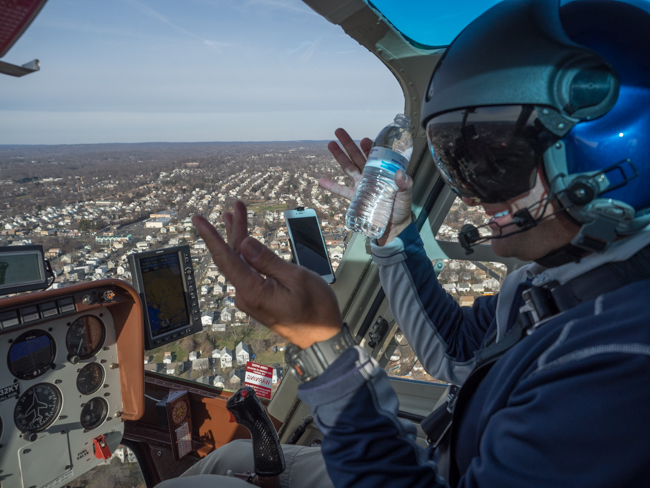 He said, "Look, ma, no hands!" (for a second)
He told me later that he had never done that before in all his years of flying. But we were having fun chatting and I think I was the most enthusiastic guest he had ever had on a ride. 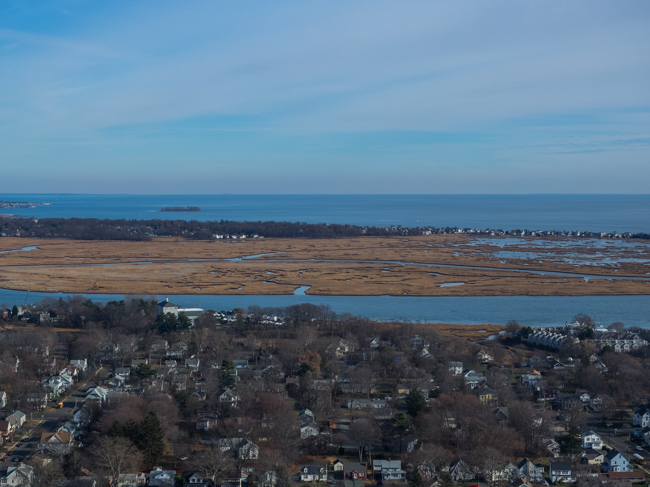 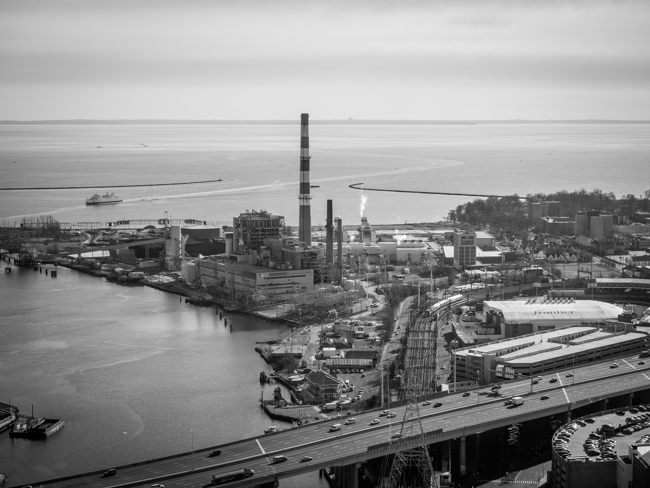 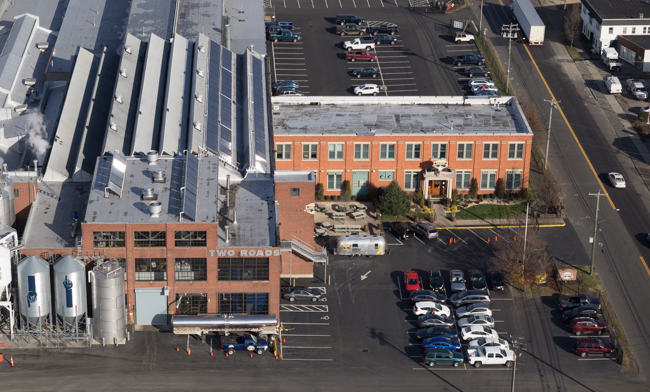 A closer look at Two Roads. 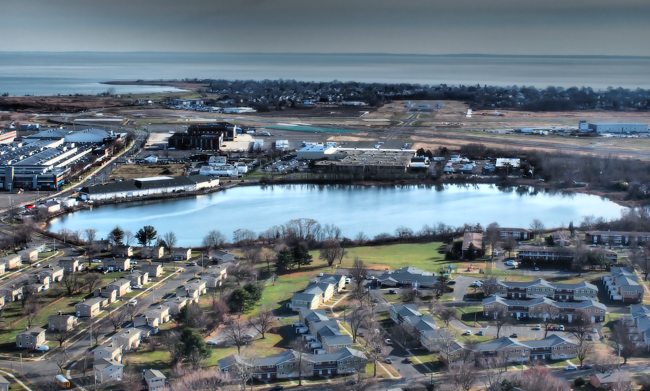 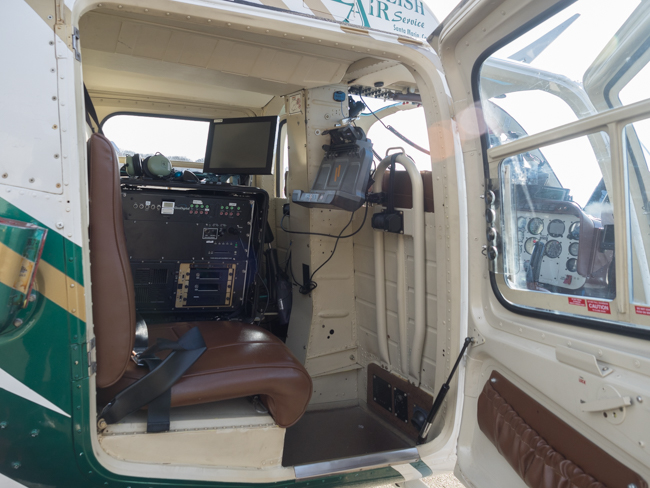 The technician's equipment, she sat in the back. 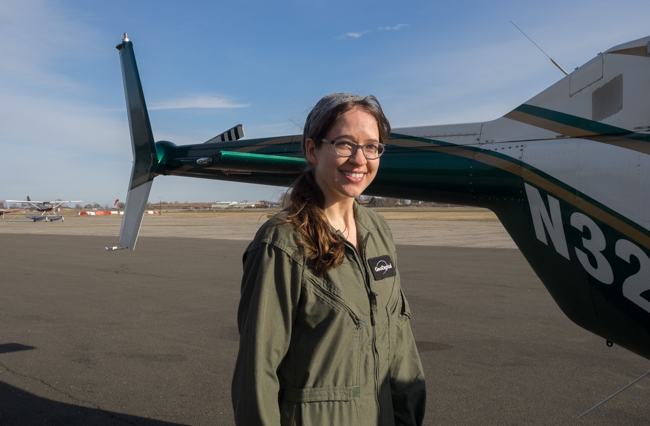 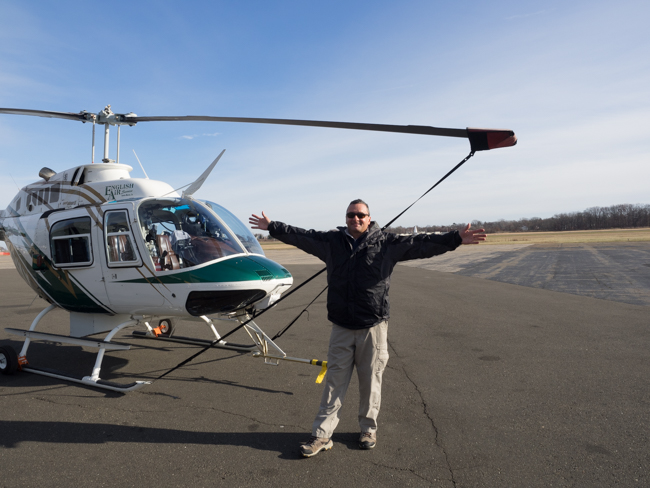 An amazing experience! There was no air sickness feeling and I tend to be very sensitive. I did take Meclazine the night before and morning of the flight thinking it really wasn't an option to get sick that day. I was pleasantly surprised that it just felt like we were gliding in the air. Very different than a small plane.

Thanks for taking a peek at the Connecticut shoreline from the air.

Here's the song I mentioned, "I Believe I Can Fly", performed by R. Kelly. And OMG I love that my last photo above and the photo for the video almost look the same! Another "coincidence". I truly did not plan that at all! First time looking up the video as I finished up the blog post.  :)  Thanks for the wink, Universe.

Until the next Magic adventure!