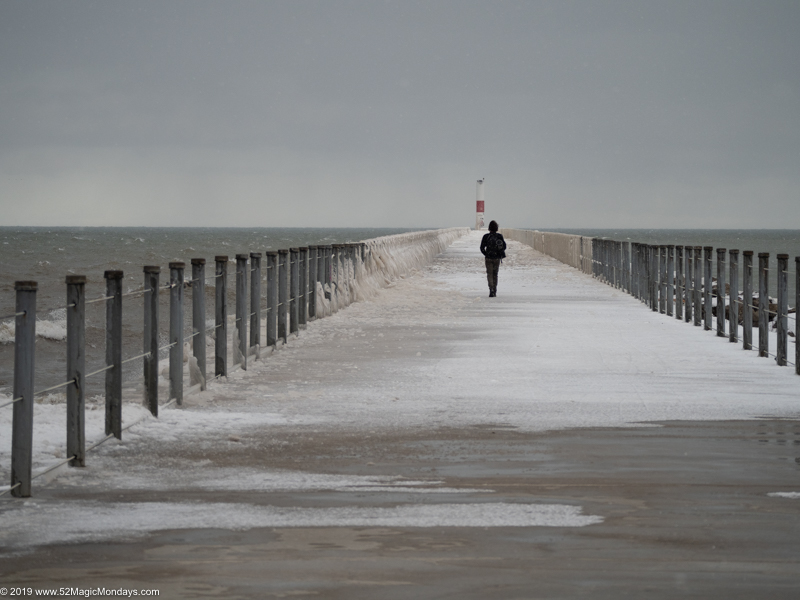 "Ghost" shooter at the lighthouse

While I was in the Rochester, NY area in January, I rode up to Ontario Beach Park on Lake Ontario. When I first arrived a wild snow squall hit. I waited it out and the sky cleared a bit after 15 minutes. Bundled up in snow pants, my new amazing Northface 3-in-1 jacket, hat, gloves, Sorel boots with strap on cleets, off I went to shoot the lighthouse. The wind was whipping which was the main reason I was up there. I was hoping to capture waves crashing up high on the lighthouse and to see the ice building up on the pier. All of that happened.

And also the story below... 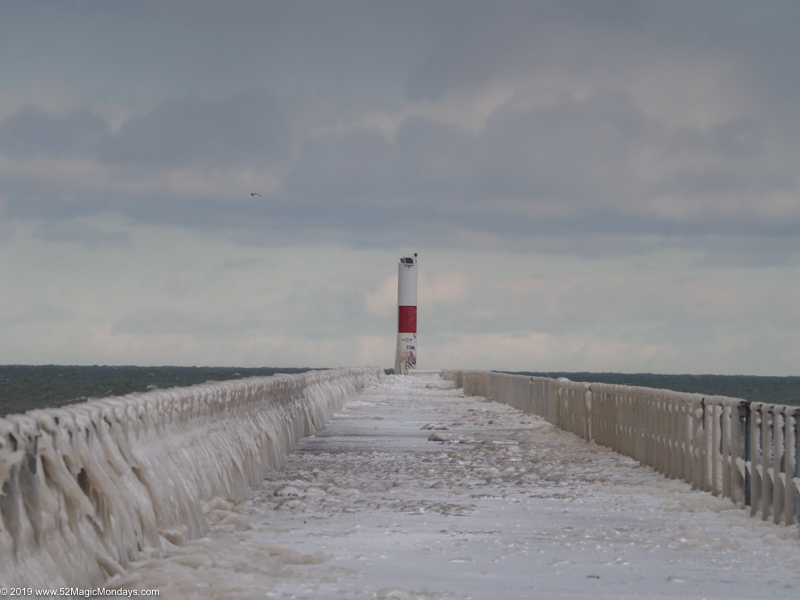 The snow squall cleared and I headed to the pier. Being a newbie to the area, and having friends who have had waves crash into their equipments and knock it in the lake, I decided to err on the side of caution. I did walk out a bit, but not past the point where the waves were coming onto the pier. I was alone while shooting so there wasn't anyone there to throw me a lifeline if I fell in (not that there was even one around)! The waves were ok, nothing spectacular. Shot for 15 minutes or so. It was pretty darn cold.

I started to head back to my car when I spotted someone coming out to take pictures. 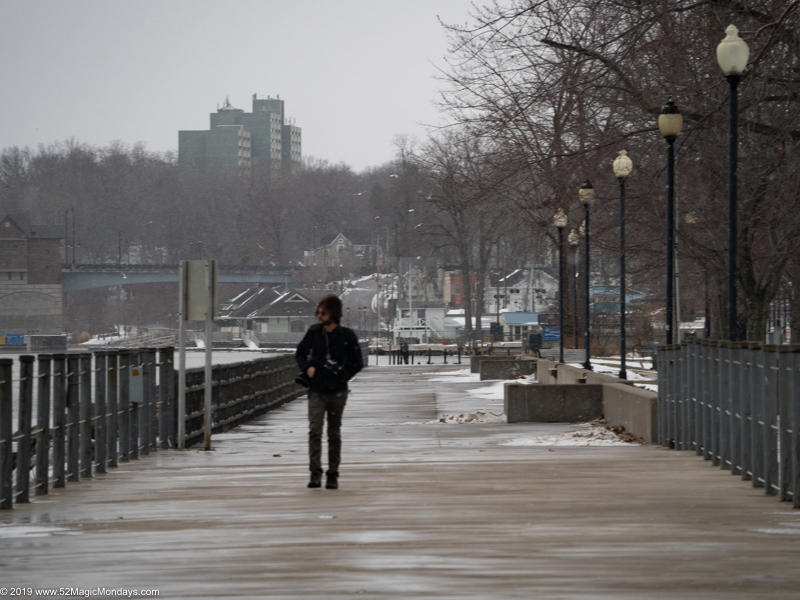 He stopped to briefly say hello. He asked me what I was shooting and I told him Olympus E-M1 Markii. He said he had an Olympus E-PL7 in his bag, but today he was focusing on shooting film. I wished him well and he walked towards the pier.

Now I thought he might go to the edge where the sidewalk gets icy and take a few shots. I mean, look at how he was dressed...thin pants, light boots, light jacket, no hat and NO GLOVES. I would be cold walking around the mall indoors dressed like that. LOL 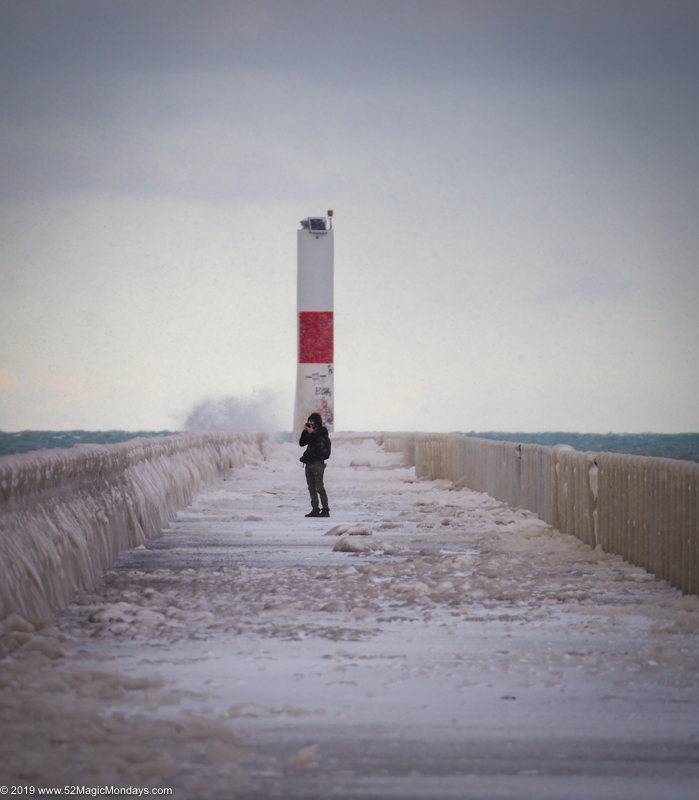 Ummm, okay. That's far enough, my friend. So glad you finally stopped walking. Please note the significant wave behind you.

Oh no, you are walking even farther out? How are you doing this? 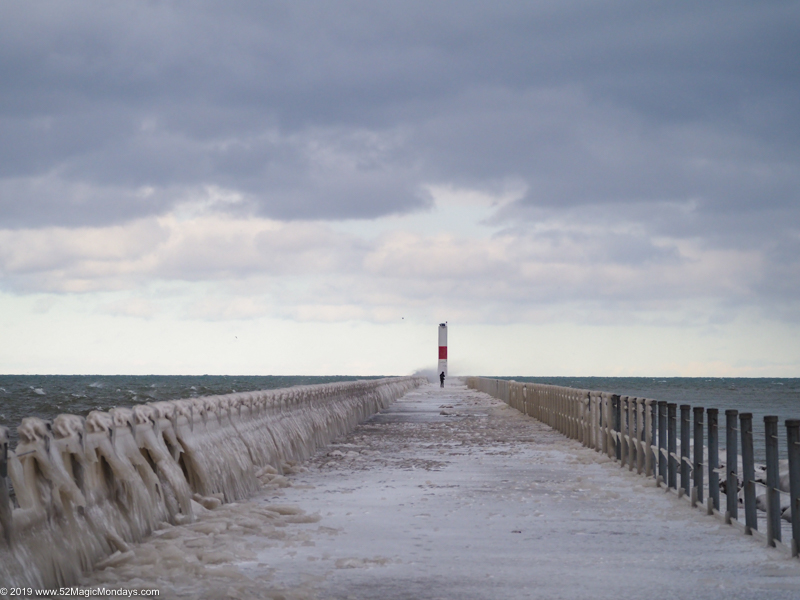 Here I've zoomed back to around 75mm (using a 75-300mm lens) so you can see how far out he has really walked! Waves are actively crashing on the pier behind and ahead of him. 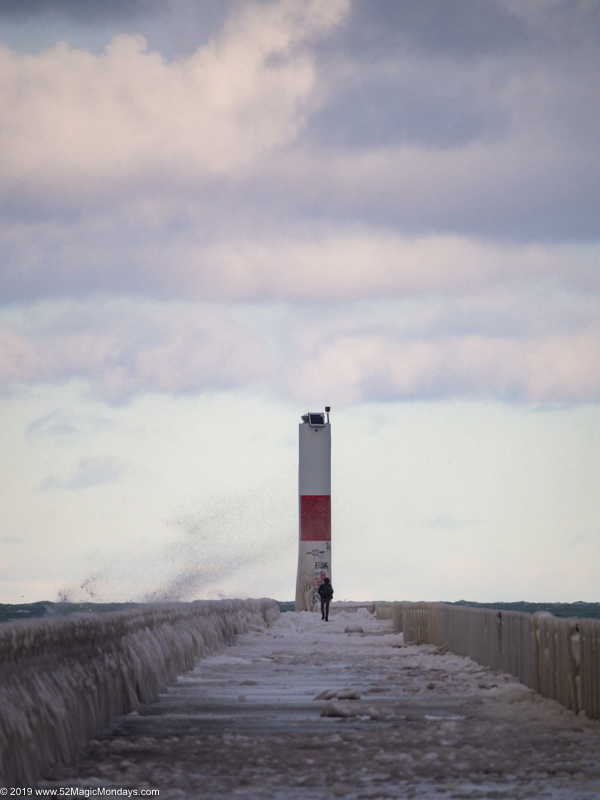 And he is continuing to walk again towards the lighthouse! So now I'm kinda stuck. I don't feel comfortable leaving. There was nothing I could do if he got swept out in the water, but at least I could call 911 if that did happen. So I continued to watch and shoot.

Let me mention again - NO HAT, NO GLOVES. It was in the 20's and the wind was obviously whipping to create the waves, plus the mist from the water. 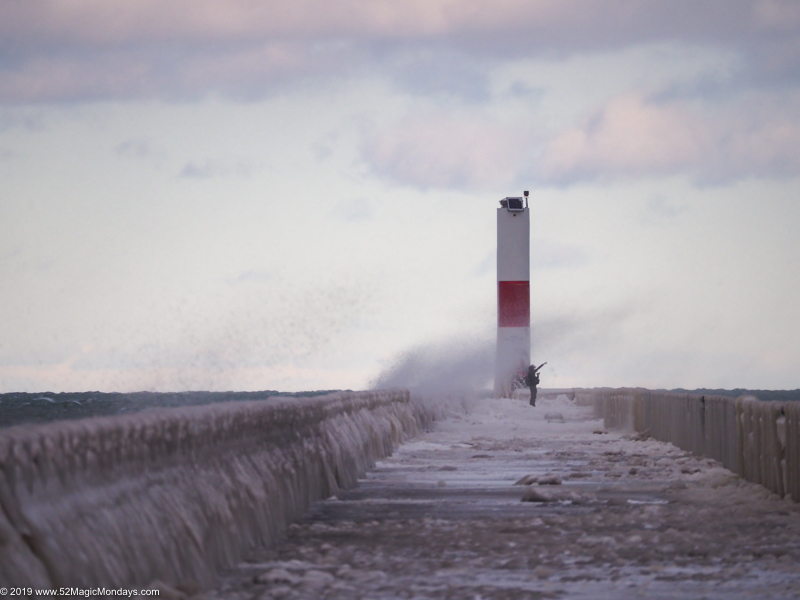 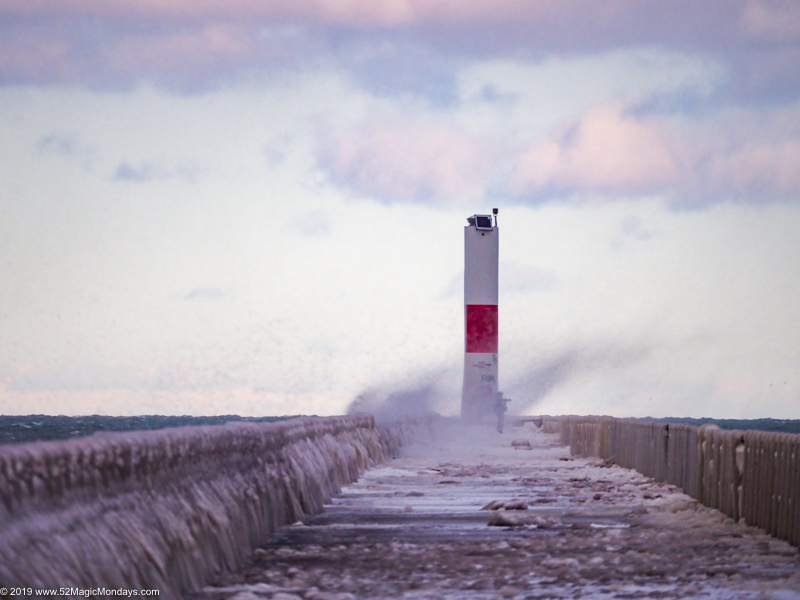 Just taking in the view...

Is your lens not covered in water?

And he's walking farther out again!! 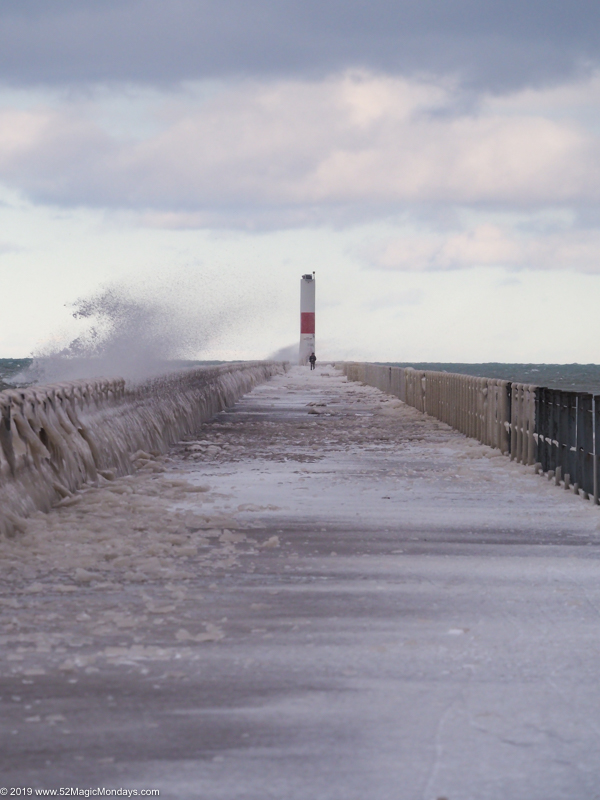 Waves are getting closer to me. I'm not in danger at all, just keeping an eye on things. I'm zoomed in a good distance. 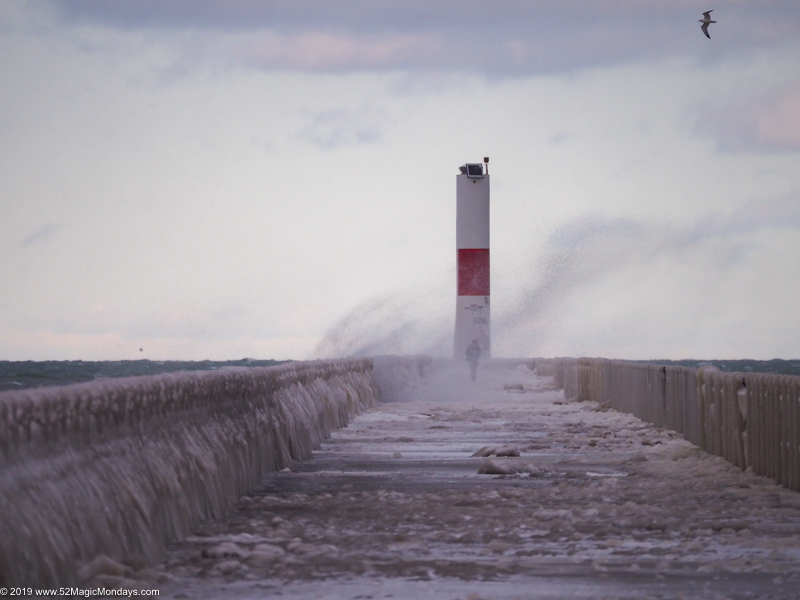 He's  starting to walk back towards me. FINALLY. 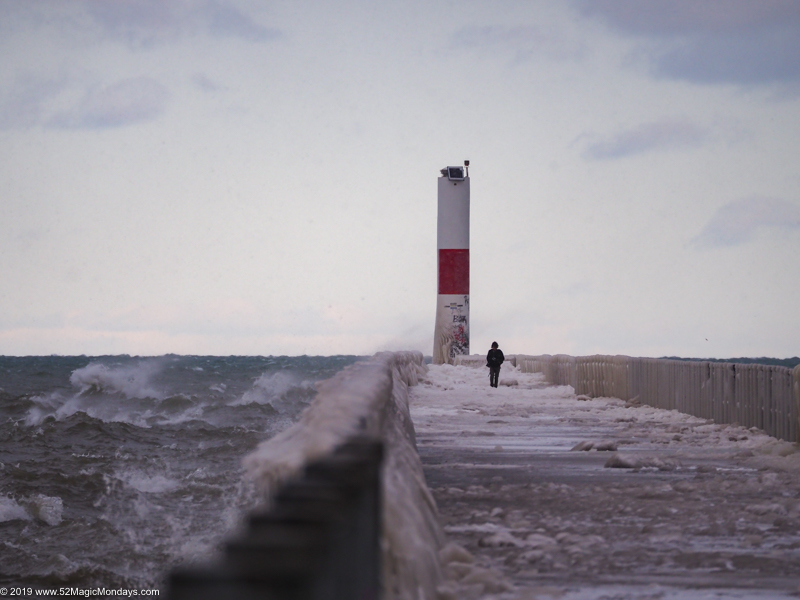 The sea was angry that day, my friends, like an old man trying to send soup back in a deli.  ;) 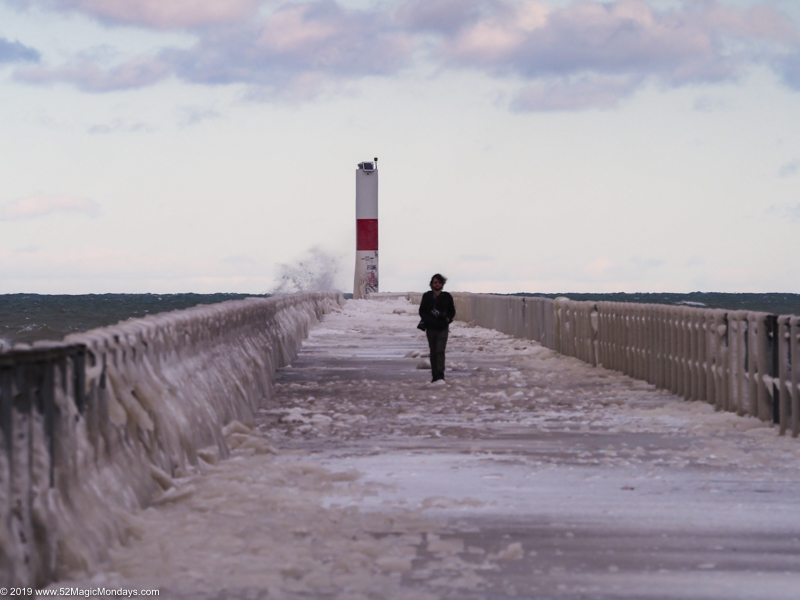 And as I watch you walk, I wonder if you are real or something else. Are you part human, part popsicle?

Peeking at the timestamps on my photos, I took the first photo of him around 12:22pm. This last photo I took at 12:41pm. So he was out there a solid 20 minutes. Amazing. Crazy, but amazing. I didn't stay to chat, I felt like I saw what I needed to see and one day I will understand what or who he was. He could, of course, just be a guy with incredible stamina for the cold. But there was something surreal about the entire experience. Hard to explain the feeling I had during those 20 minutes.

So that's my "ghost shooter" story! I'm glad it had a happy ending.

Pretty lighthouse pictures of this lighthouse and the Sodus Point Lighthouse on my other blog post.

Until the next Magic Metro!

Comments: Shoot me an email! megancrandlemire "at" gmail "dot" com