It feels good to travel once again, albeit locally for now. The unexpected 2020 hiatus did nothing for my photo endeavours and it seems I've gotten out of the habit of taking my Olympus camera along (I mean, where did I really go the last year++?) so the pictures I'm sharing today are iPhone shots. In my preferred photo editing program, Lightroom, they don't look awesome. I know phone camera technology has improved, but when you throw an iPhone picture in Lightroom, it hightlights the limited capabilites of a phone camera. Ah well, the best camera is the one you have with you.

So Albany, New York! What a gem. We ended up here twice in the last couple of weeks, both times unexpectedly. Traveled to Connecticut in July for graduation parties and timing led us to stay overnight in Albany as we made our way back to Rochester. Both times, we stayed downtown a block away from the capitol. The government buildings in this city are E.N.O.R.M.O.U.S. More like structures you find in Washington D.C. I suppose with 19 million people living in New York State, there is going to be some serious governmenting going on to manage the population. 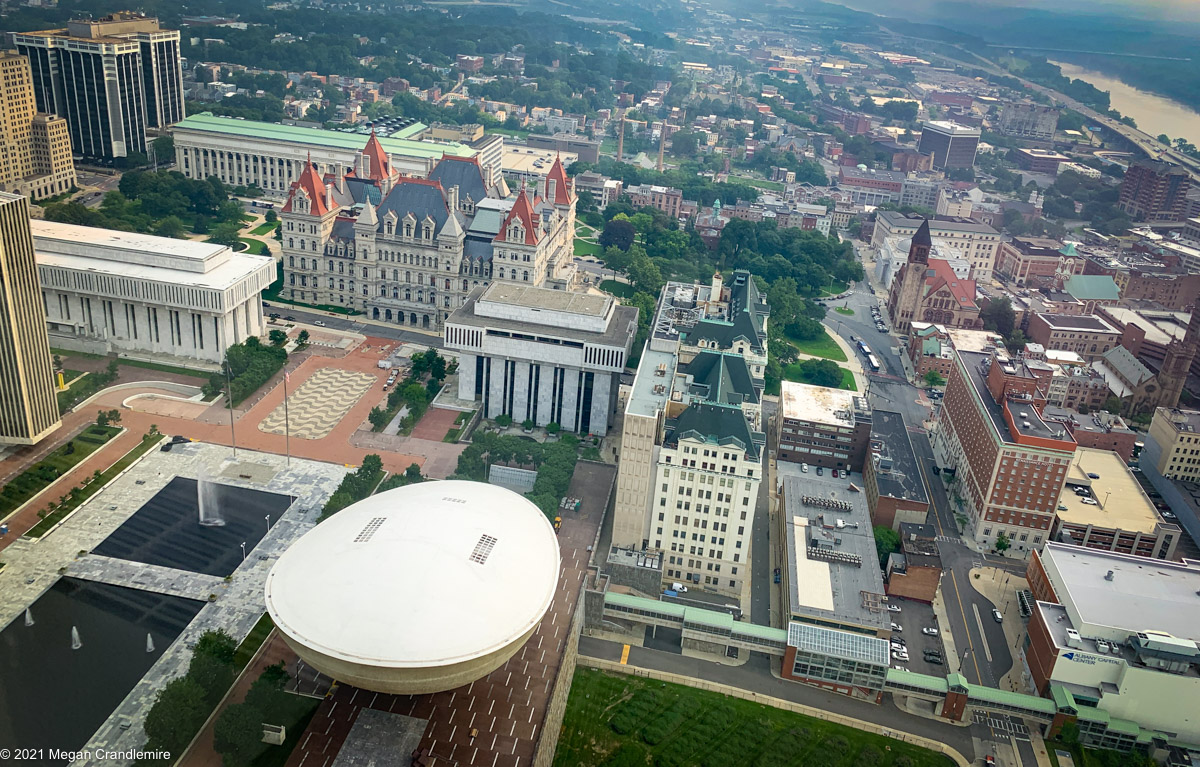 I took this photo from the observation deck on the 42nd floor of the Corning Tower on the plaza. The giant white blob is called "The Egg." It is owned by the State of New York and managed by the Nelson A. Rockefeller Empire State Plaza Performing Arts Center. You can see the plaza area to the left of The Egg and in front of the capitol building which is just to the far left of The Egg in this photo. The plaza was built between 1965 and 1976 and is more commonly known as the Empire State Plaza. 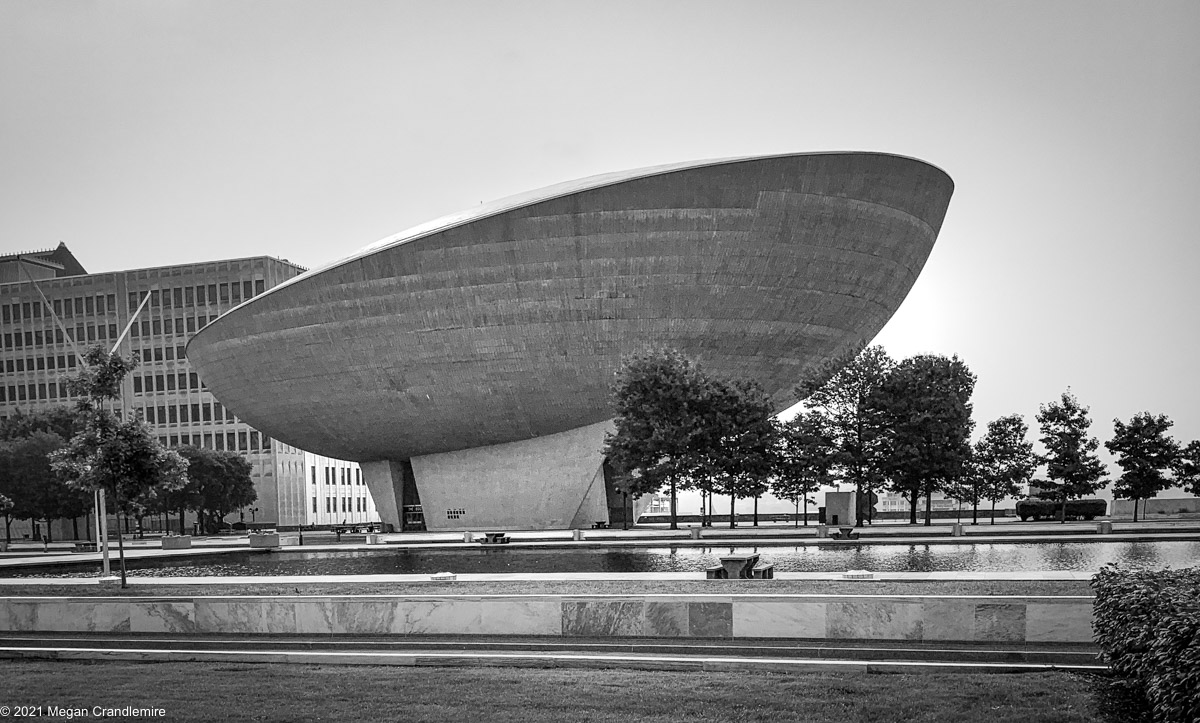 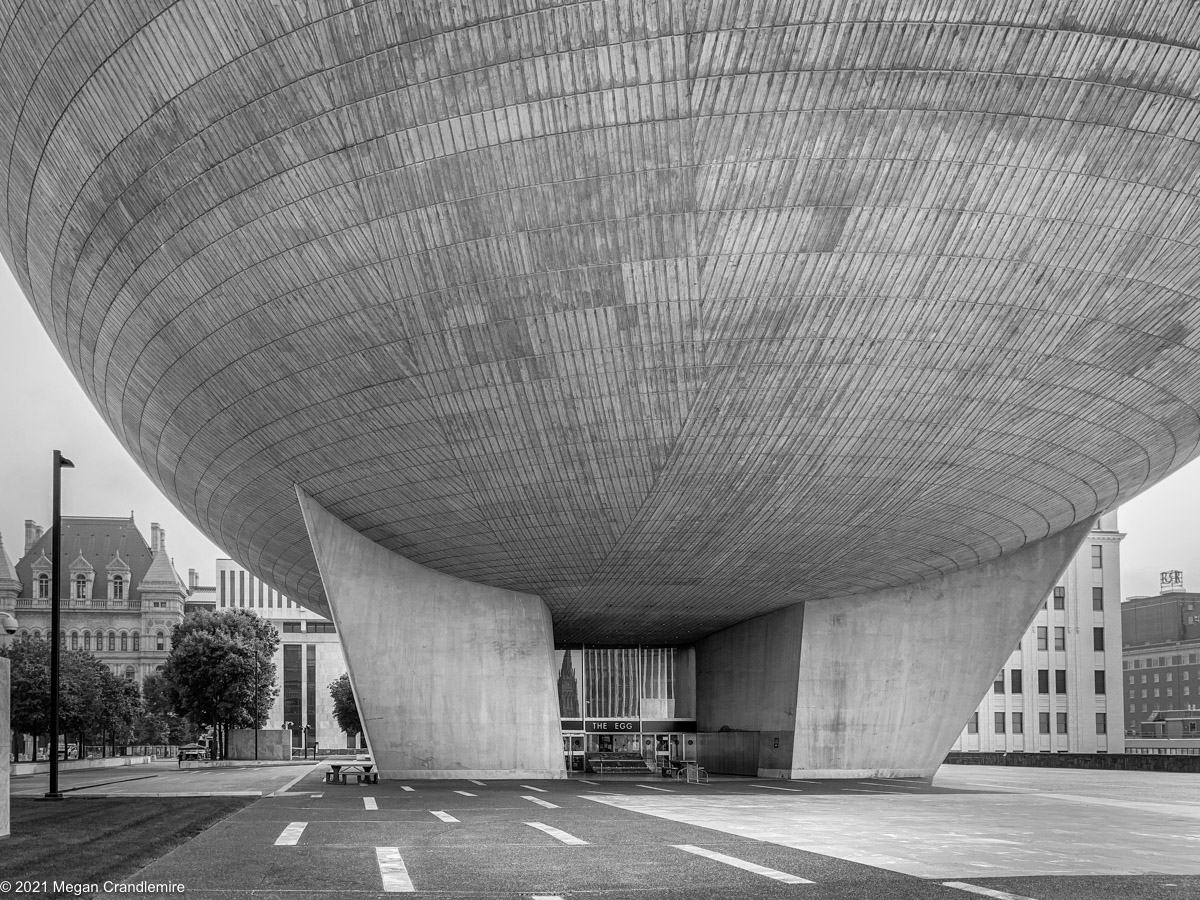 I know...it's really something. The base looks like piggy feet to me. 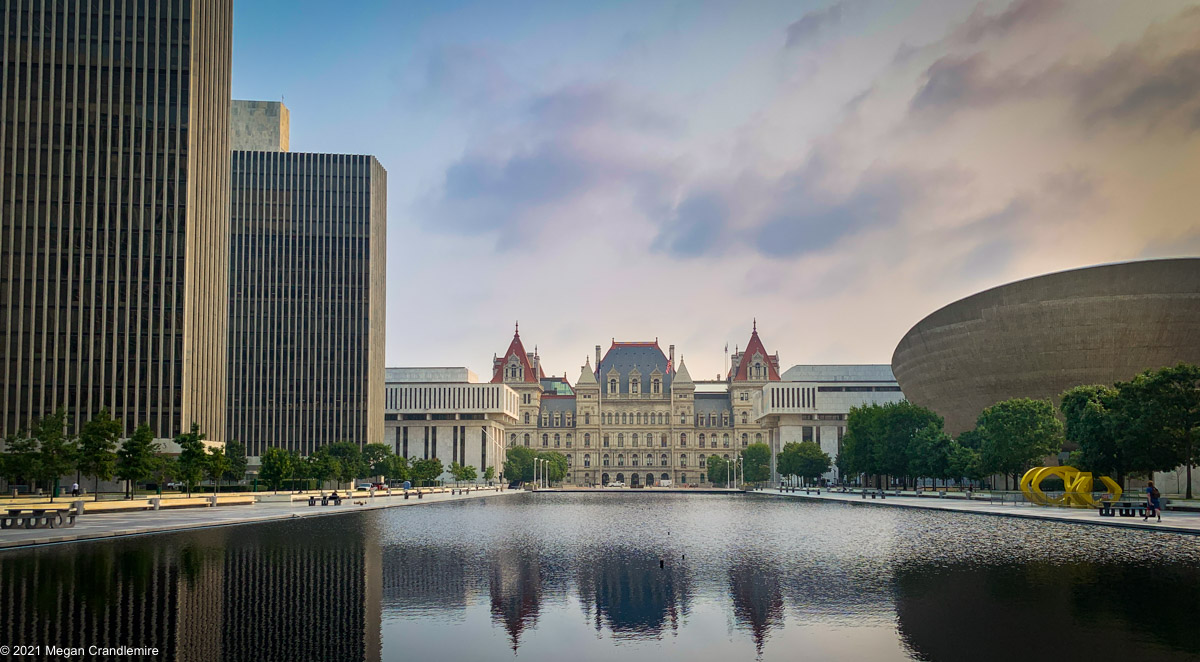 The Empire State Plaza is quite beautiful. We saw baby ducks apparently born in these plaza pools. As the older guy feeding the ducks said to us, "not sure why she had them there, nothing much to eat." 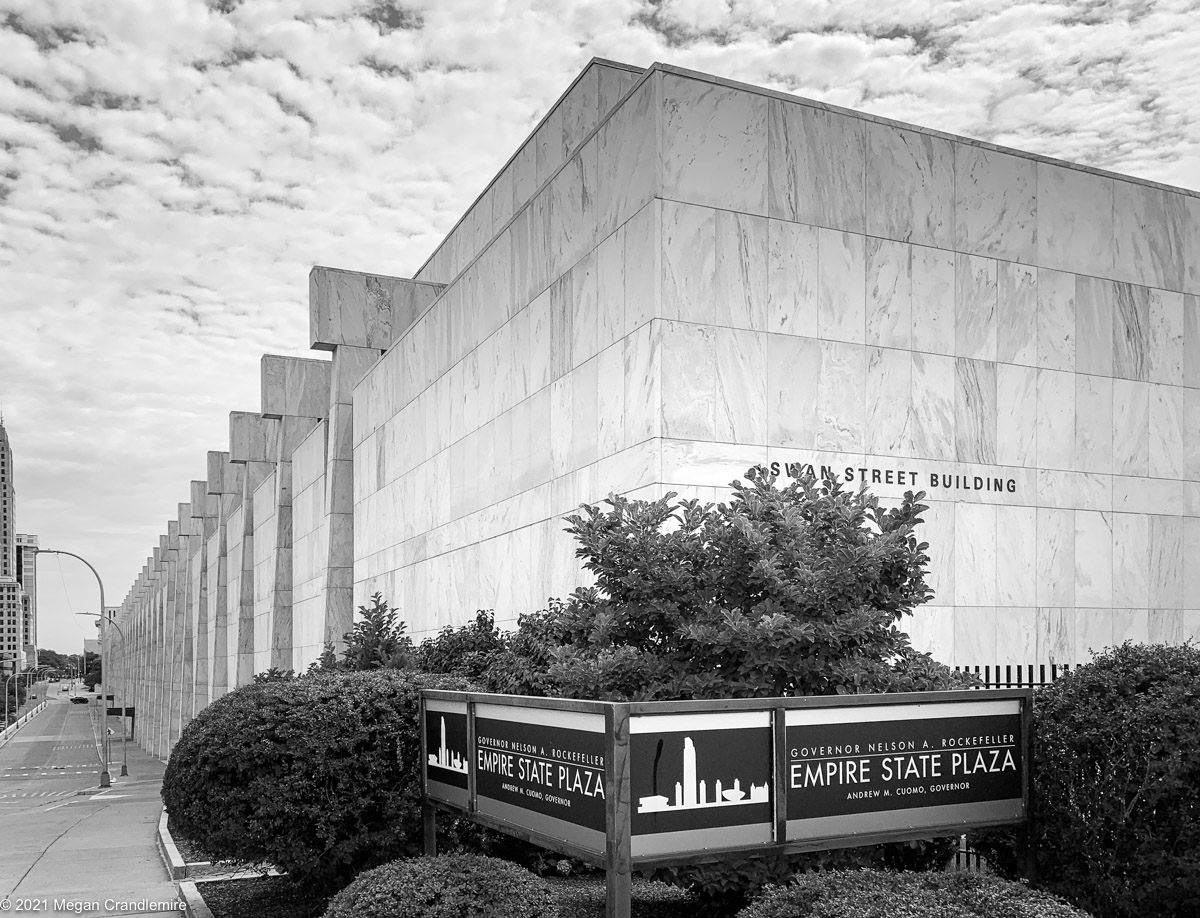 The Swan Street Building borders one corner of the plaza. It was constructed in 1968 and is 117,500 sq ft. Hey, that’s when I was “constructed!” LOL 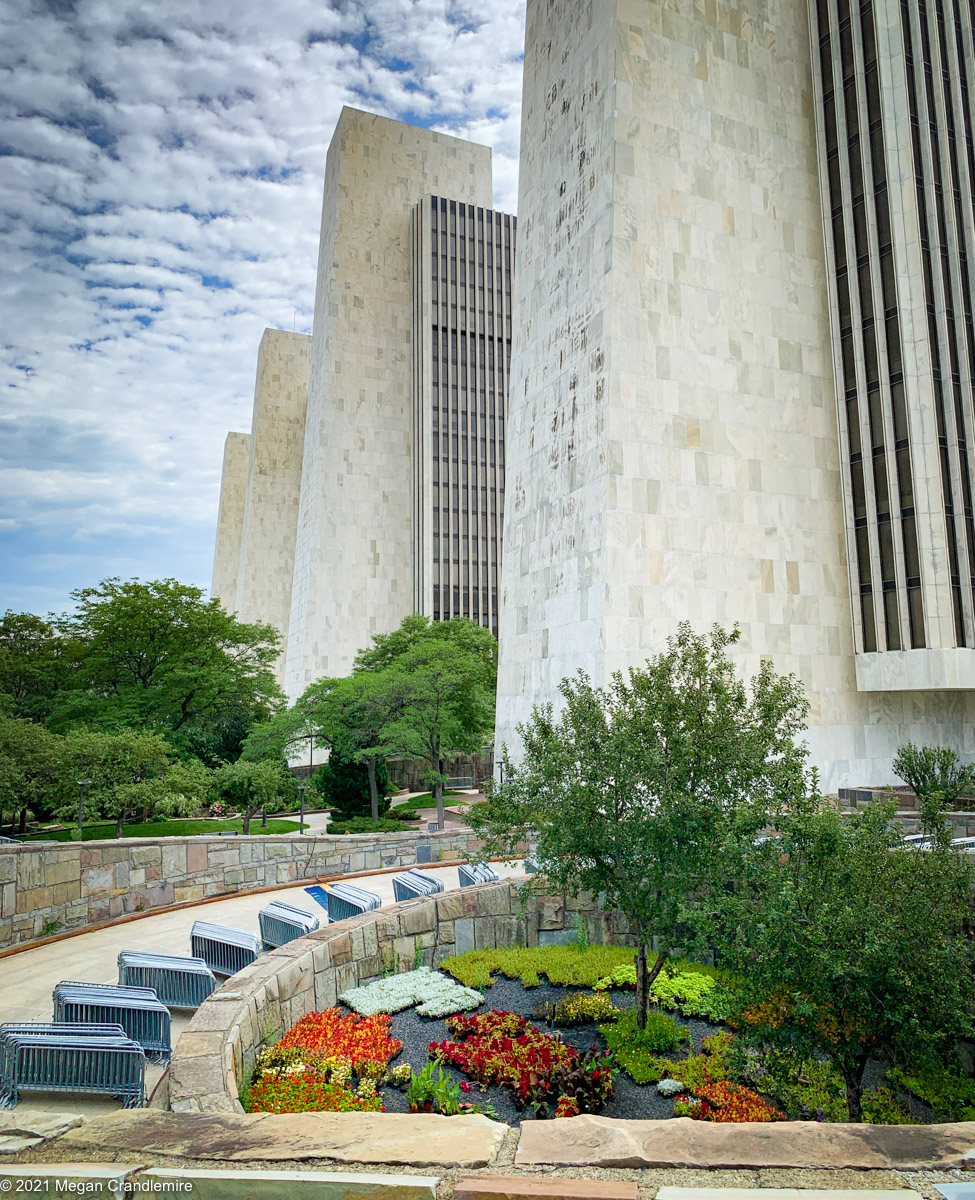 I love the mix of nature and architecture here. 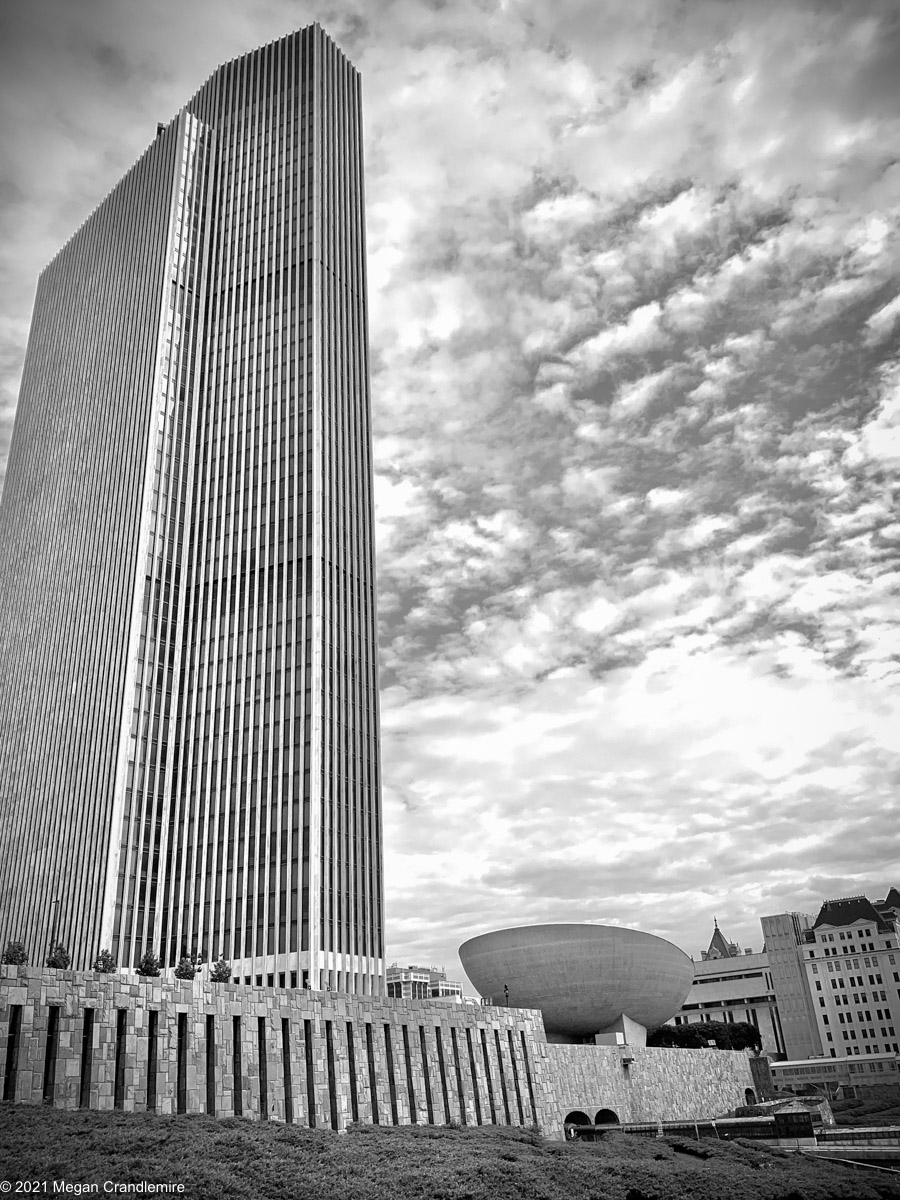 From the side street looking at the plaza area. 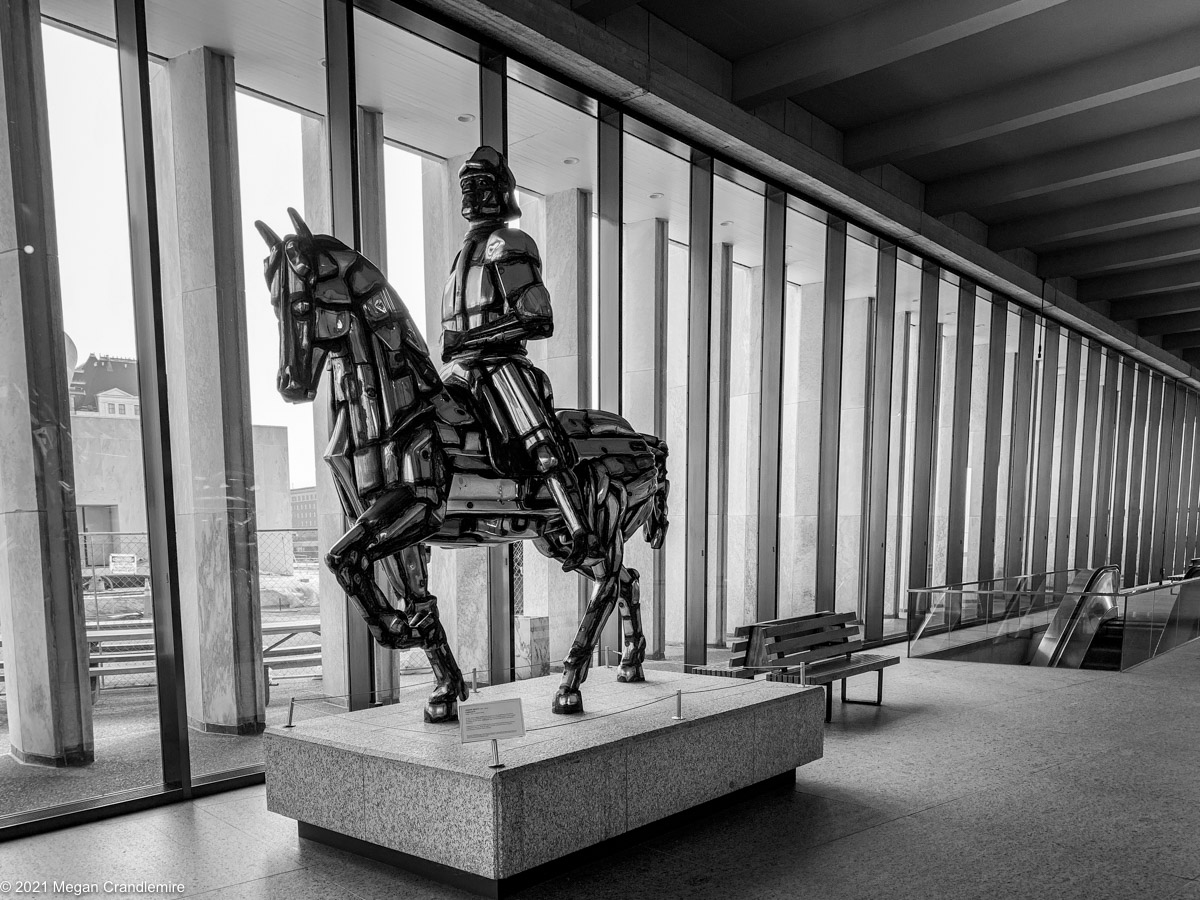 Inside the lobby of the Corning Tower. And yes! IT IS a sculpture made out of Buick car fenders. How ever did you guess?

The art piece reminded me of Tom Friedman's temporary art installation on Park Avenue in NYC back in 2016 called "Looking Up" - it was made of crushed roasting pans (yes, the baking kind). FYI Apparently Looking Up found a new home fairly recently: https://bit.ly/3BBx7Bg 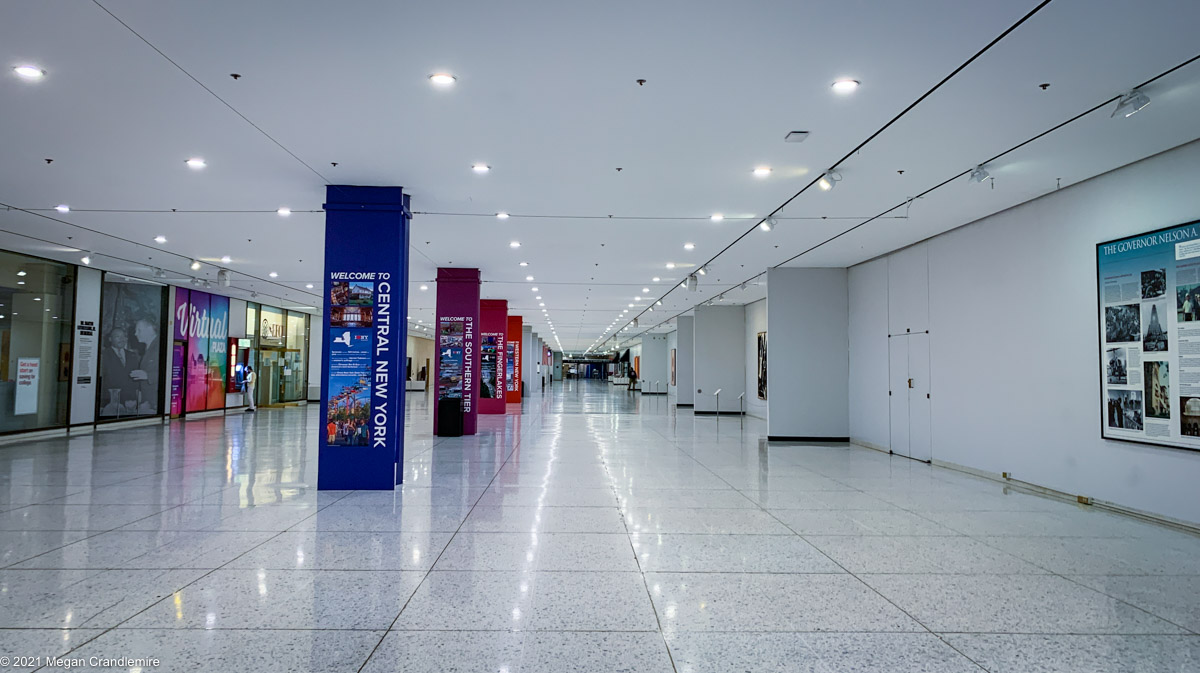 So underneath the plaza is Albany's underground world. All of the huge governmnent building around the plaza are connected underground. There are restaurants, meetings rooms and stores tucked away below the surface - probably more, but that's what I could gather without Secret Service escorting me around. I suppose this makes sense since it snows a decent amount in Albany and the city is also built into a hill. Park once and you never need to see the light of day as you make your way from building to building. The Plaza occupies 98 acres of land and has more than 11,000 employees in 10 buildings. 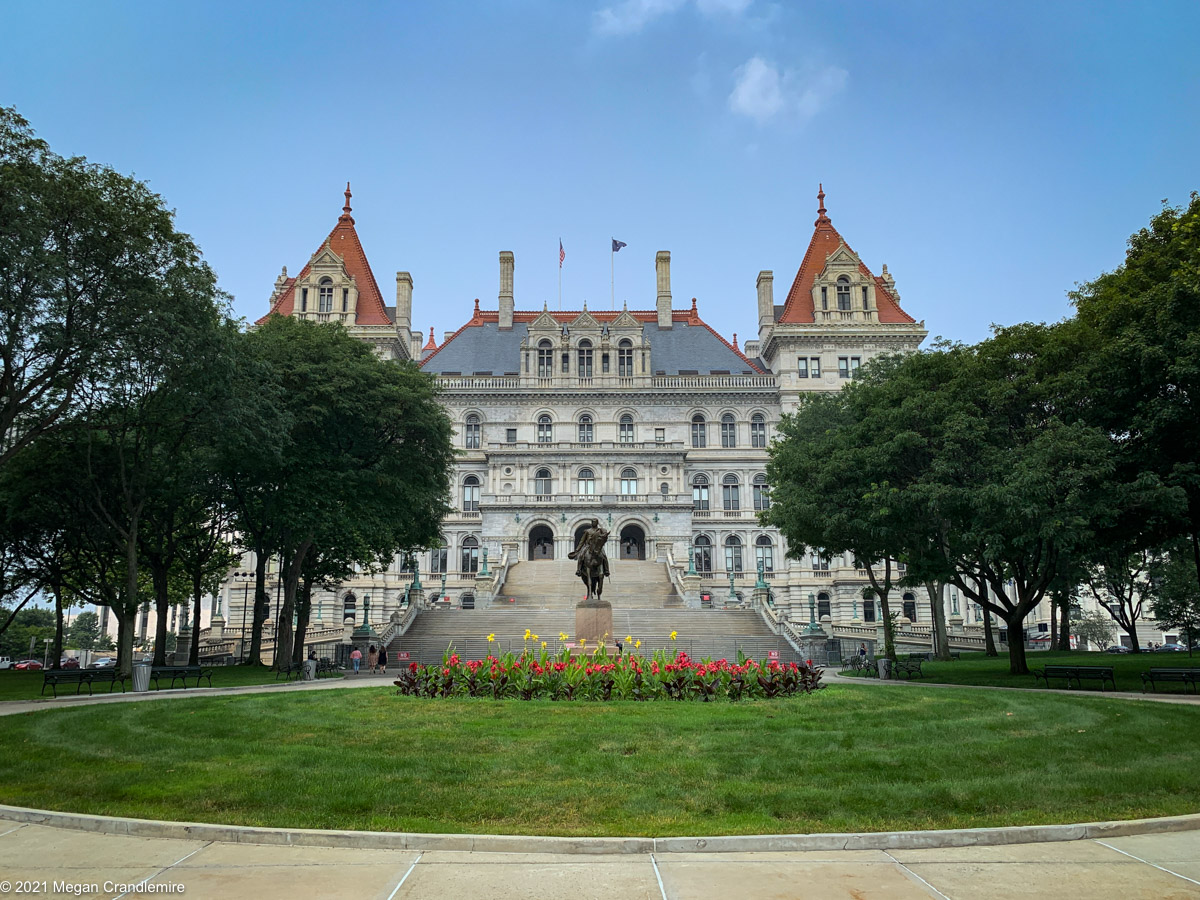 My favorite shot of the outside of the capitol. 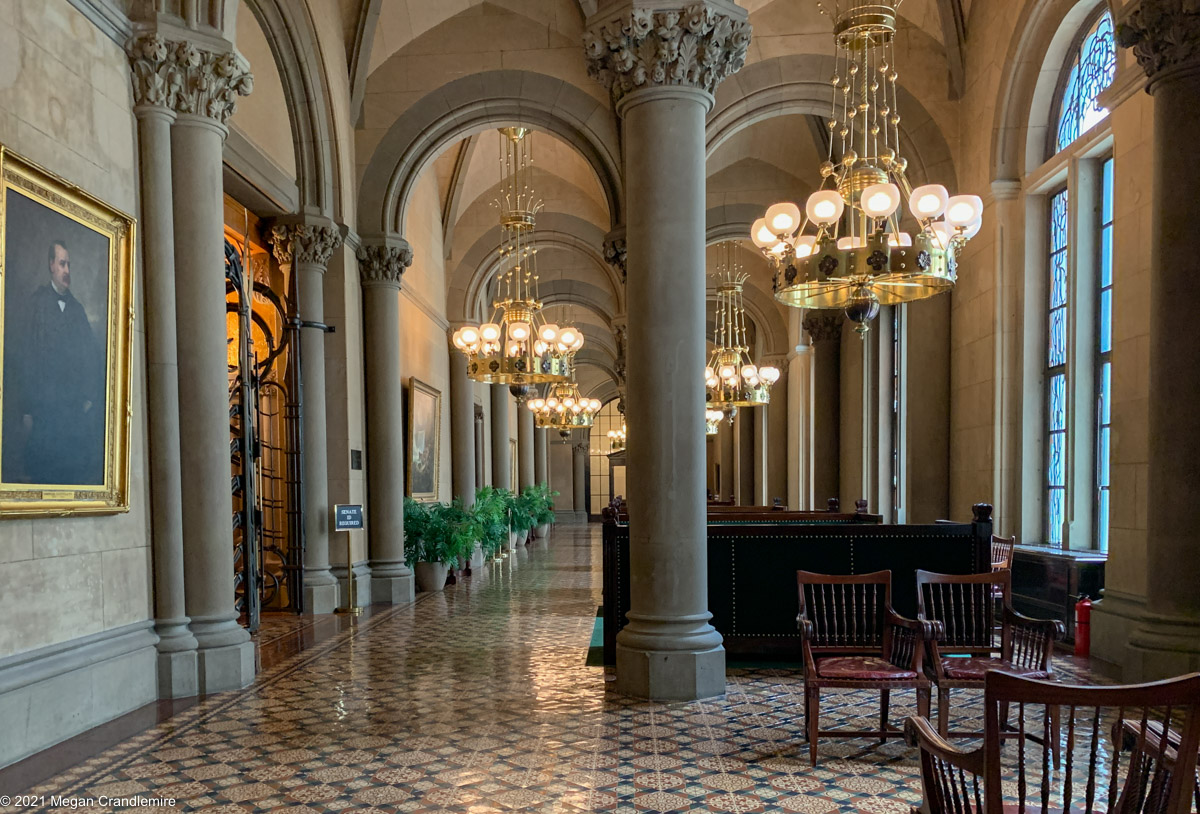 Inside the capitol building, you have the option to take a guided tour (if you time it right - we did not) or you can grab a map and just wander the building on your own! Nothing was in session so we were free to go anywhere that was not locked. It's a beautiful building inside and out. 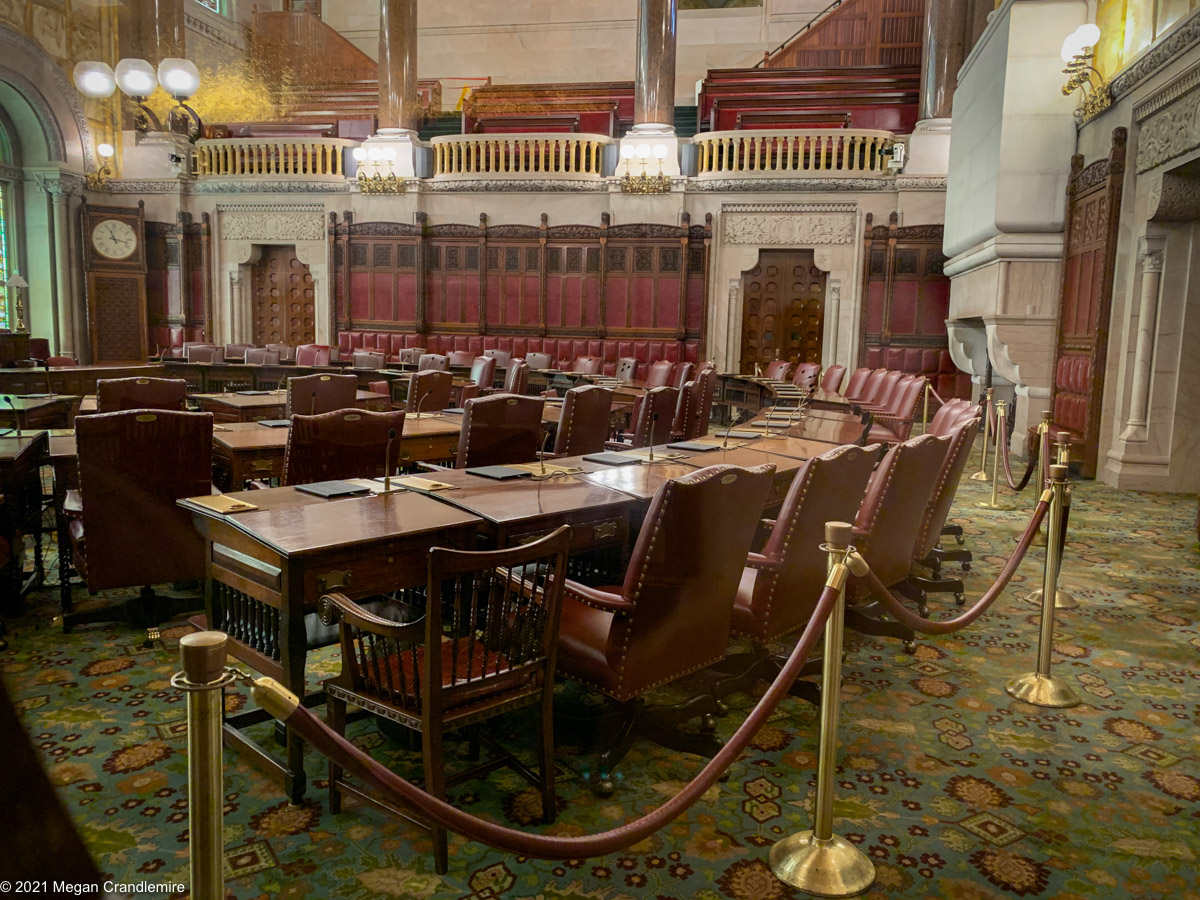 The NY State Assembly room peering through a window of a store. I don't have a political bone in my body so I know nothing much about how all this political stuff works, but the room did remind of those English movies where people have long robes and wigs. 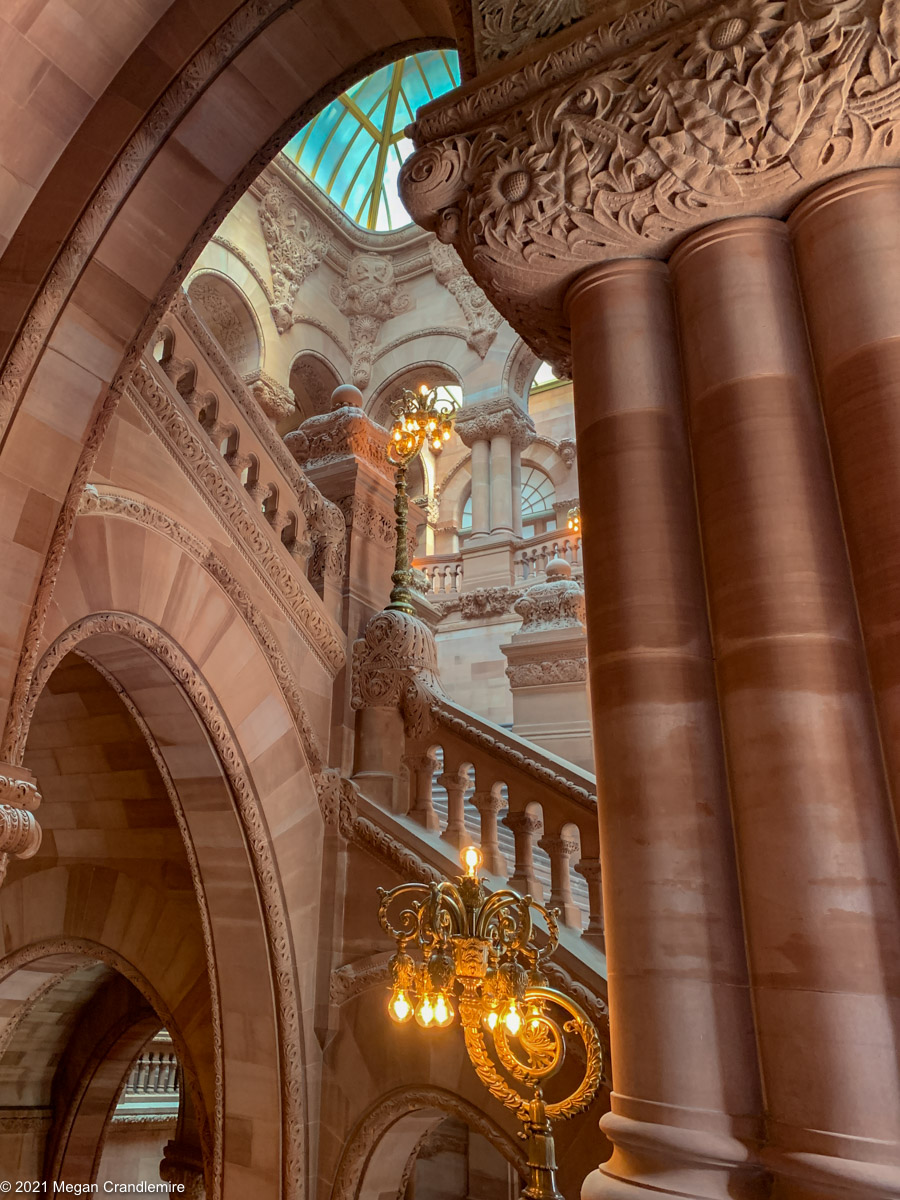 It's worth going into the building just to see the Grand Staircase.

Fun facts about the staircase: 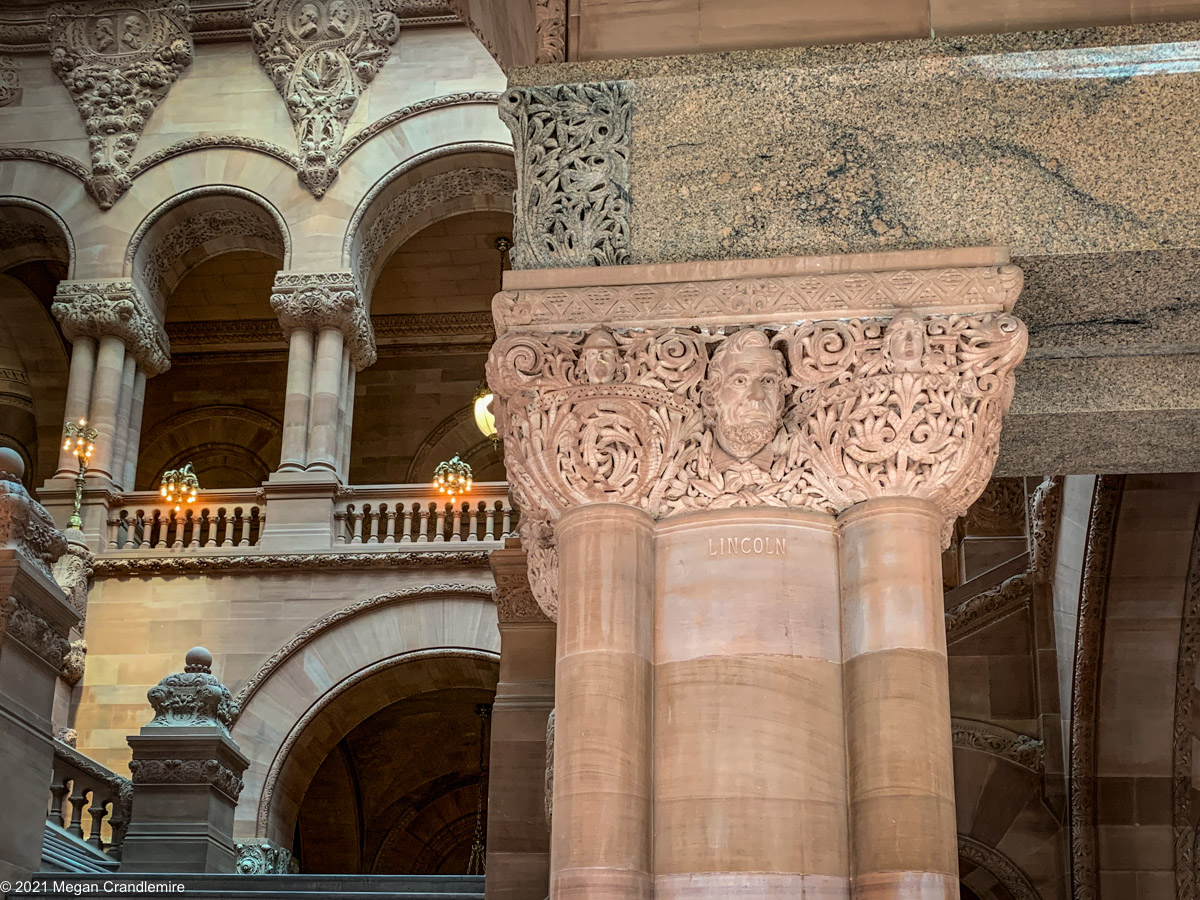 An homage to Abe. 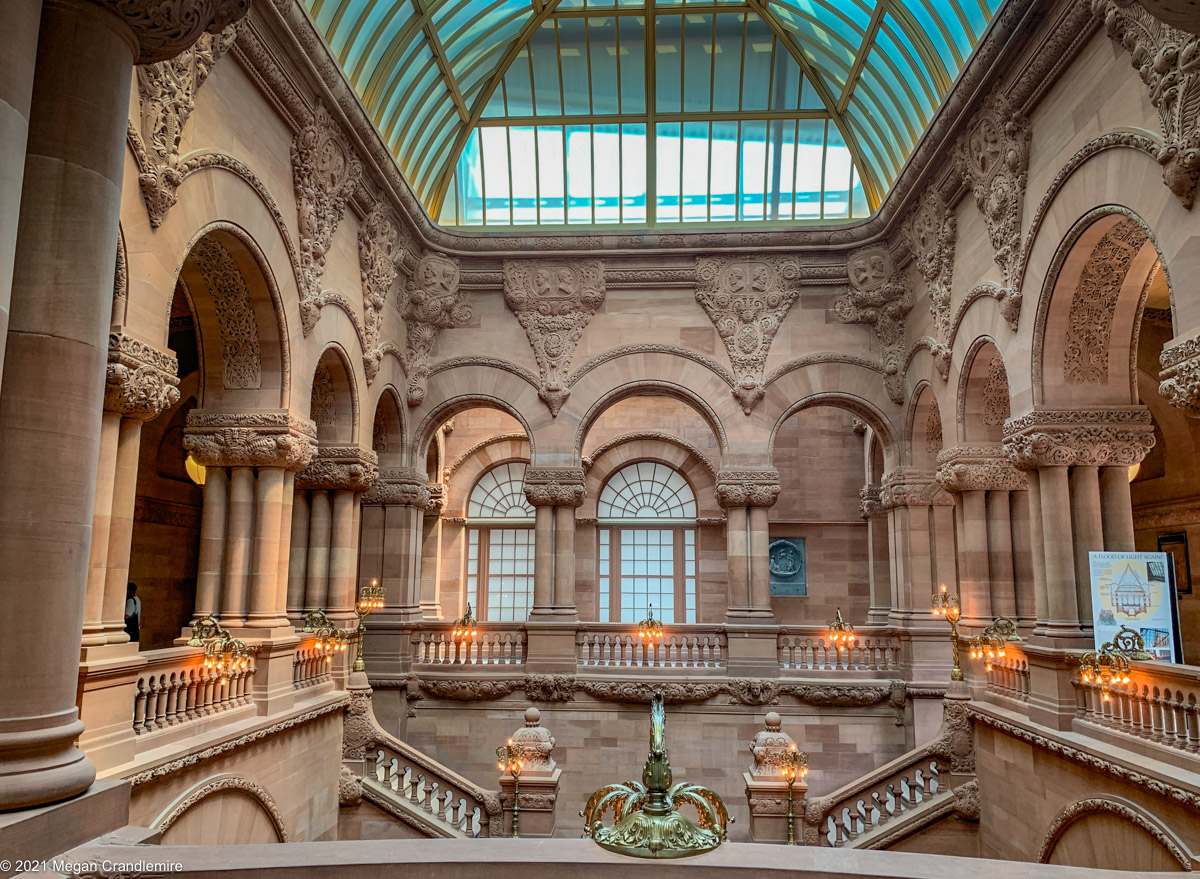 An iconic shot from the 4th floor of the Grand Staircase. 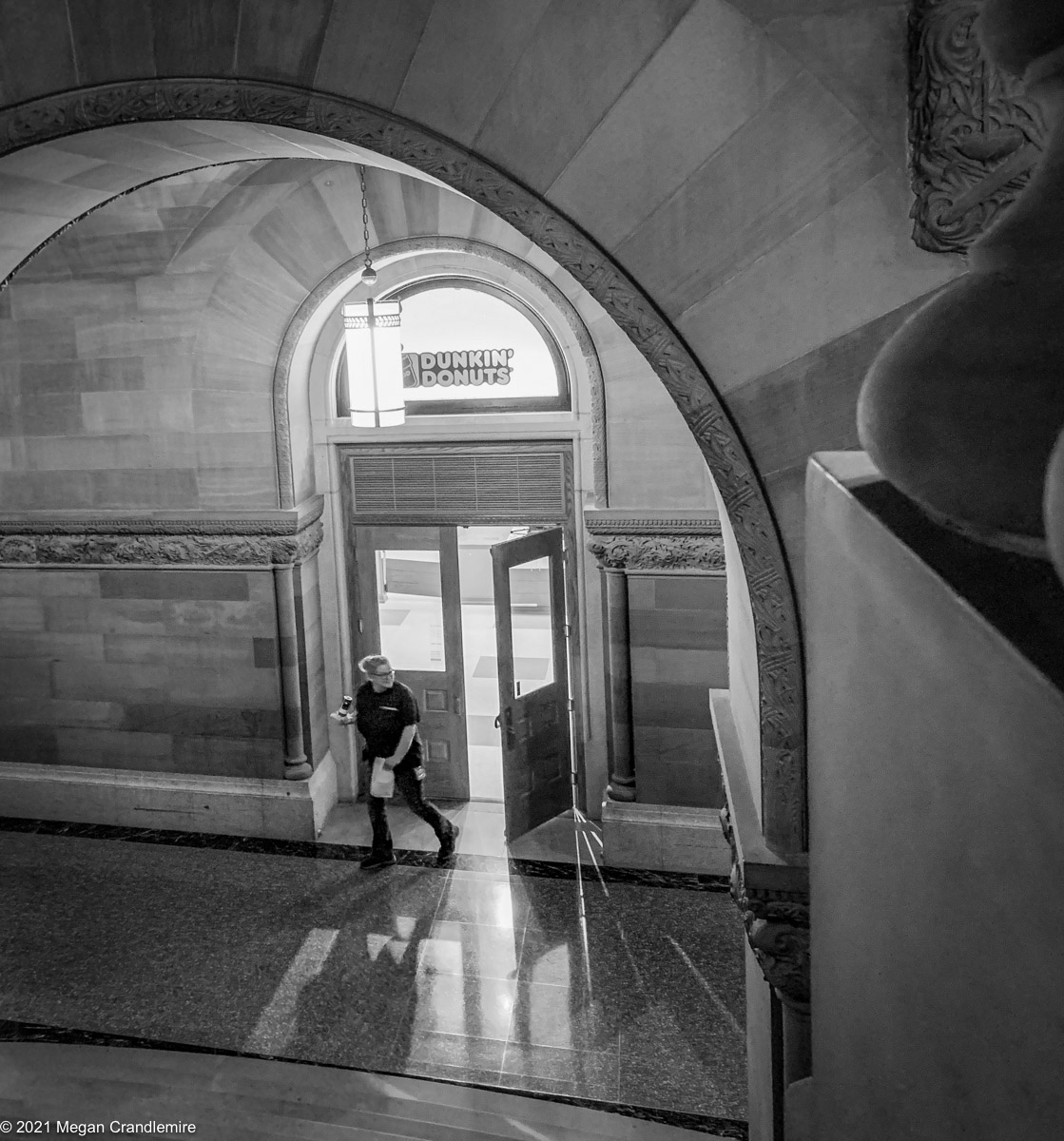 What's that? You want to know if they have a Dunkin Donuts inside the capitol building? Why yes, it's on the ground floor. Grab a coffee and a bagel before making your way to the NY State Assembly room to pass a law. How convenient. 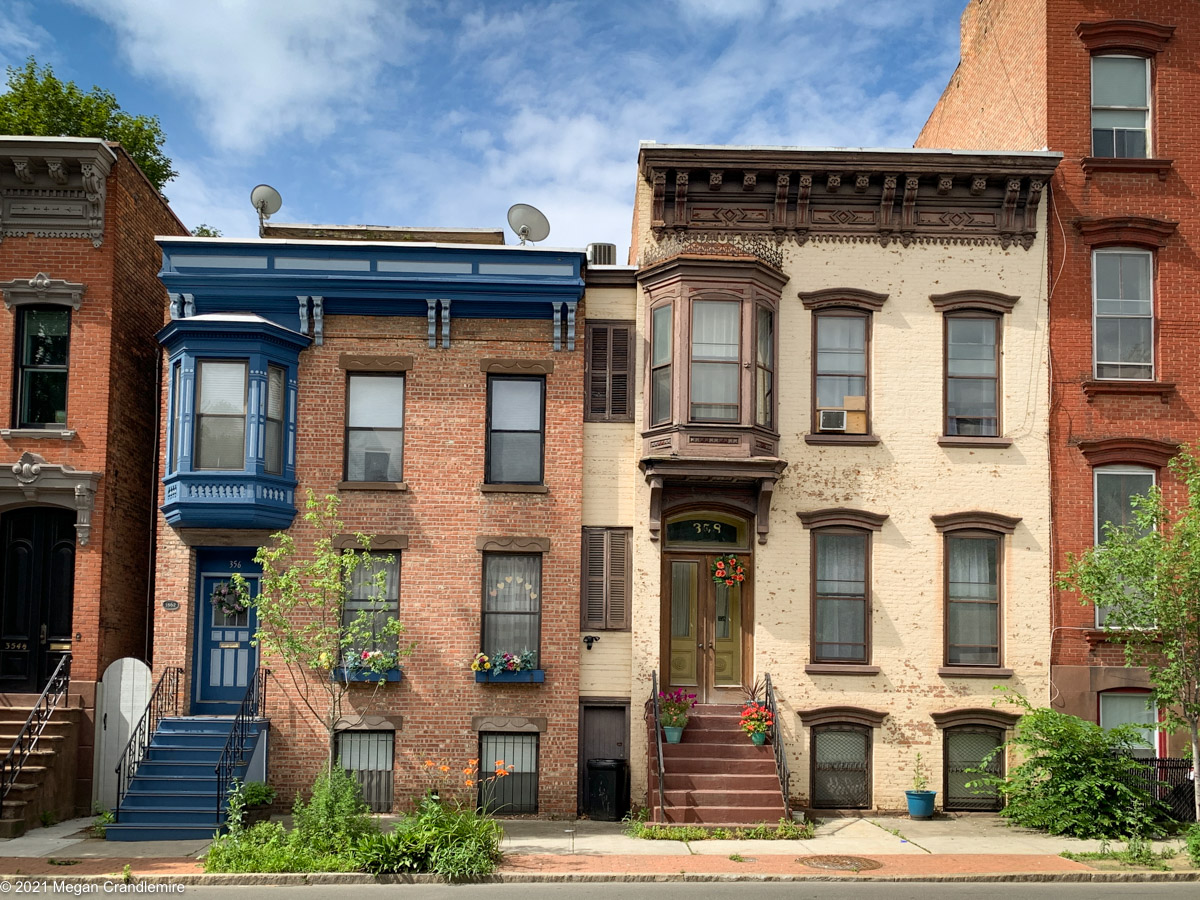 The neighborhoods nearby reminded me very much of some areas of Harlem I explored during 52 Magic Mondays. 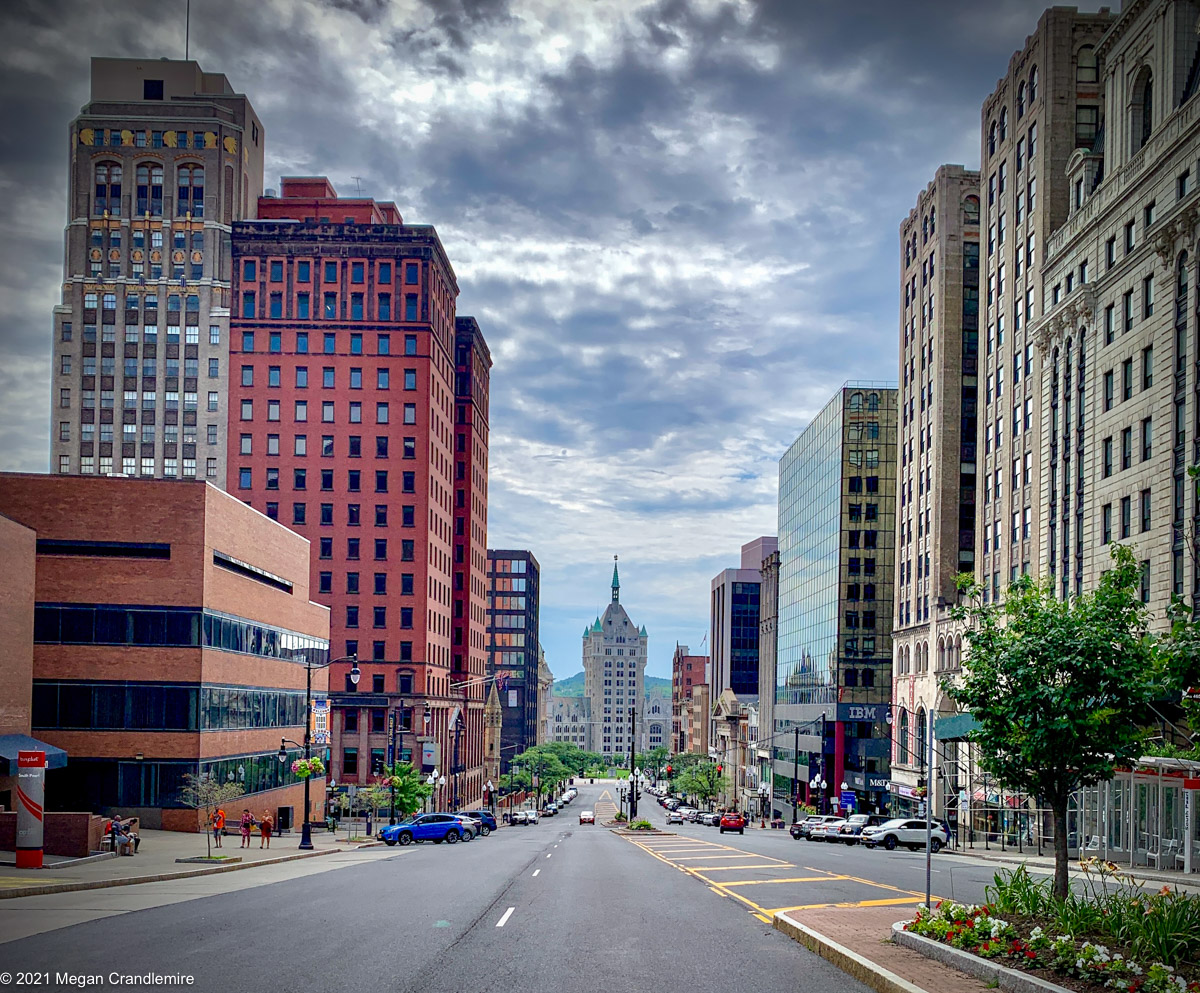 A couple of blocks from the capitol building, I'm looking towards the Hudson which is behind the beautiful SUNY Albany building at the bottom of the hill. 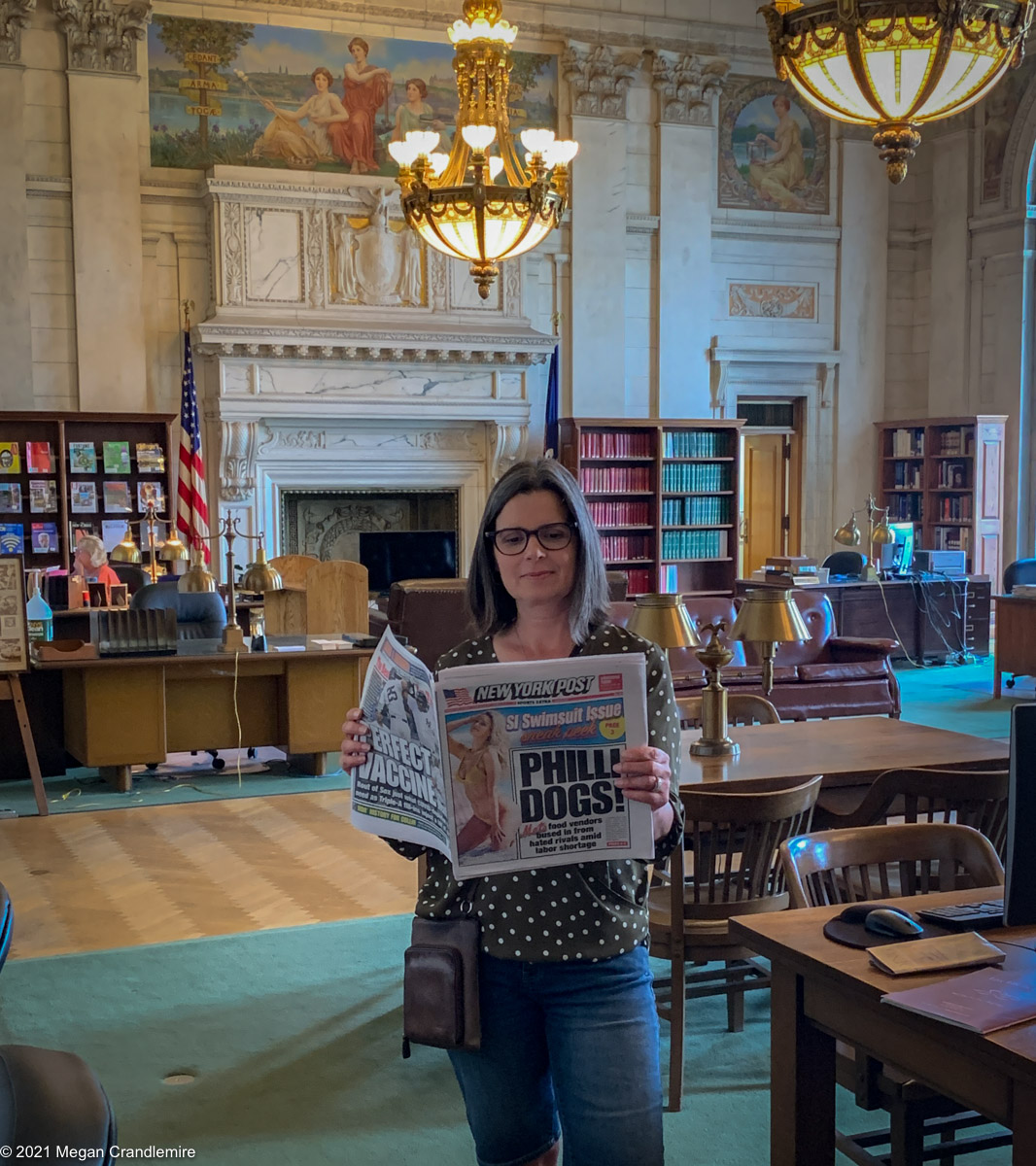 If you followed 52 Magic Mondays, you might recall that I always brought home a New York Post after my Monday in New York. Funny to find that the beautiful library inside of the capitol keeps daily copies of paper! A New York staple.

Nothing more fun (to me!) than exploring a new city. Until the next Magic Metro...